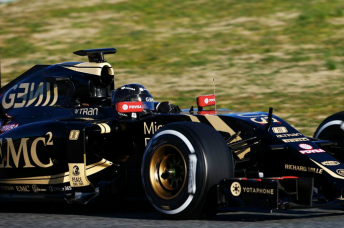 Romain Grosjean end the final day of the test on top

Romain Grosjean followed in the footsteps of his team-mate Pastor Maldonado by setting a session best in the E23 on super-soft tyres.

However, the Frenchman’s 1:24.067s effort was only o.254s quicker than Nico Rosberg’s Mercedes with the German posting an impressive time on medium compound rubber.

It was the highlight of a strong day for the reigning world champion team as Rosberg logged 131 laps despite an early spin in the morning session.

While Lotus and Mercedes topped the times, Alonso grabbed the headlines just before lunchtime when his McLaren left the circuit at high speed at Turn 3, resulting in the Spaniard being airlifted to hospital.

A subsequent CT scan revealed the double world champion escaped injury with McLaren confirming Alonso had suffered a concussion, which saw him remain in hospital overnight as a precaution.

McLaren curtailed their running for the day after just 20 laps completed.

The team left the test having racked up only 124 laps in total.

“Fernando’s accident was just one of those things that happens in testing,” said McLaren’s Eric Boullier.

“Fortunately, he’s fine, but was concussed during the accident, which therefore required an overnight stay in hospital as a precaution. That’s normal practice after a concussion.

“Inevitably, some media reports have sought to exaggerate the severity of the incident – it was just a normal testing accident.

“While the car wasn’t particularly badly damaged, it was enough of an impact to warrant quite a lengthy check of the gearbox and power unit systems.

“Given the time needed to carry out such an analysis, we decided to bring the curtain down on our test a few hours earlier than anticipated.”

Meanwhile, Red Bull Racing’s Daniil Kvyat posted the third fastest time albeit half a second slower than the Mercedes on soft compound rubber.

Felipe Nasr made the most of a super-soft tyre run to clock the fourth quickest time ahead of the Williams of Valtteri Bottas.

Toro Rosso’s Carlos Sainz Jnr ended the day in sixth ahead of Sebastian Vettel’s Ferrari which was limited to 76 laps as the Italian team elected to change a number of parts on the car.

Force India’s Nico Hulkenberg completed only 36 laps due to an engine issue.