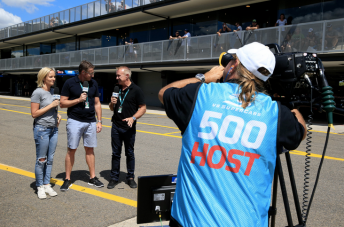 Fox Sports has announced more details of how it plans to tackle the unprecedented coverage of the V8 Supercars Championship Series starting with the showpiece Clipsal 500 in Adelaide this weekend.

A total of 40 hours of live coverage will begin on Thursday with the practice and qualifying sessions from 9am (ADET).

Fox will use Mark Skaife, Russell Ingall and Jessica Yates in between sessions as well as pre and post race while Chris Stubbs will present breaking news with Greg Martin listed to capture colour from around the circuit.

The subscription broadcaster will showcase new technology and on-board camera angles as well as the rooftop-mounted Hamburger Cam which began live testing at the Phillip Island round in November last year.

A new Tech Centre will be included in the broadcast that will see Skaife analysing all the technical elements of racing.

On Sunday evening Fox Sports News will deliver a V8 Supercars bulletin from the Adelaide Parklands street circuit at 9pm (EDT) while the premiere of a V8 Supercars magazine show, Inside Supercars, will commence at 7.30pm (ADET) on March 3 on Fox Sports Channel 506.

The 60-minute show will be fronted by Greg Rust and Neil Crompton as well as Skaife and will provide a review of the Clipsal 500 meeting and preview forthcoming meetings.