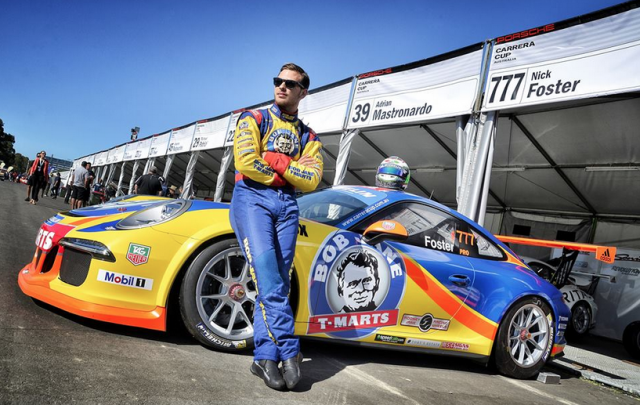 Nick Foster returns to Sonic for a second season in 2015

Nick Foster has vowed to maintain his aggressive driving style as he hunts the Carrera Cup Australia title with Sonic Motor Racing Services this season.

The 23-year-old has locked away the final piece in the Porsche category’s off-season puzzle, securing support to continue for a second season alongside team-mate Nick McBride at Sonic.

Foster finished fifth in last year’s points standings, ending the season with a maiden round victory on the streets of Surfers Paradise.

“This is really big for me, to be honest,” Foster told Speedcafe.com of racing a second season in Sonic’s Bob Jane T-Marts Porsche.

“Last year we had a fairly mixed year, but a good year. It all started to fall into place at the end of the season and we certainly finished on a high.

“I honestly didn’t expect anything to happen this year (due to a lack of budget) so I’m pretty excited to be back in the same car and the same team.

“It’s the first bit of continuity I’ve had in my racing career in many years and I’m really determined to continue what we had into the new season.”

Foster’s 2014 campaign included several incidents, most notably at Bathurst, where he triggered a multi-car melee while fighting for the win on the last lap.

While determined to piece together a more consistent season, Foster isn’t backing away from the committed style honed through his early career in karts, Formula Ford and Formula 3.

“I’m aggressive and that’s the way I’ve always raced and will continue to race. I want to win and I’m not going to back down from a challenge.

“The way we roll the championship together and we attack some situations may change a little bit, but inevitably I’m a racer at heart and always will be.

“The championship is the main goal this year, but to be honest we just want to get out there and win races,” he added.

“The championship will fall into place as the season goes on. It’s a challenging category and there’s a lot of talent out there this year.

“I’m just really excited to get to Clipsal and see where we stand and where we need to improve if need be. Hopefully we’re up the front.”

Foster first raced in the Carrera Cup during 2012, spending the following season in F3 before moving back to the Porsches last year.

The Queensland-based driver says he’ll be more than happy to stay in GT machinery long term if the right doors open up.

“To be honest it’ll just come down to opportunity,” he said of his career path.

“Obviously GT racing Australia wide and worldwide has really taken off. It’s always been a passion of mine, but at the end of the day it’s where the opportunities lie.

“Obviously the end goal is to be racing professionally at the high end of motorsport, but it all comes down to budgets and being at the right place at the right time.”