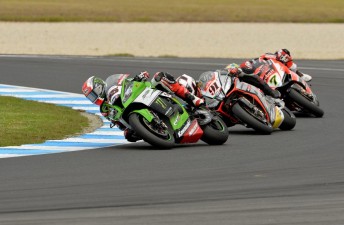 Jonathan Rea converted his pole position into a memorable win

Jonathan Rea held off a strong challenge from Leon Haslam to win the opening race of the World Superbike Championship at Phillip Island.

The Northern Irishman led the majority of the contest from pole but by the halfway stage Haslam’s Aprilia hit the front.

However, a mistake at Stoner corner from the Englishman handed Rea the lead back, but Kawasaki’s new recruit was unable to relax.

A resurgent Haslam fought his way back from fourth to challenge Rea on the final lap with the pair swapping positions. 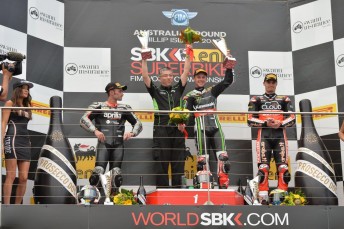 Aruba.it Racing Ducati rider Chaz Davies completed the podium in third having been involved in a titanic battle with Rea and Haslam for the entire race.

The Australian, riding as a replacement for the injured Davide Giugliano, had climbed inside the top 10 before dropping back to 13th spot at the flag.

The 45-year-old finished five seconds in front of countryman Jed Metcher on the Race Centre Kawasaki in 14th position.

The final World Superbike Championship race of the weekend is due to begin at 2.40pm local time.