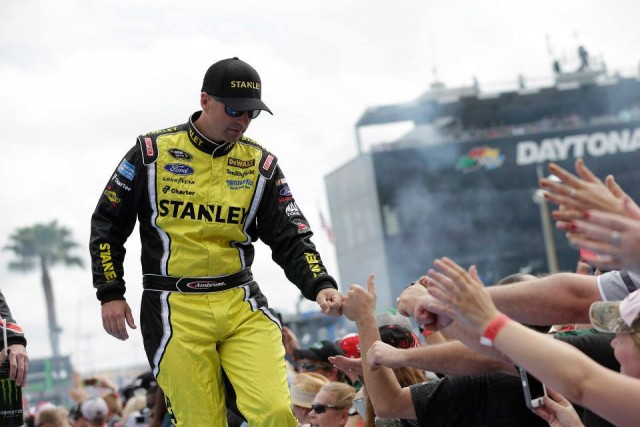 Marcos Ambrose made six starts in the Daytona 500, but won’t be watching on this year

Marcos Ambrose insists he won’t be watching on when NASCAR’s Sprint Cup Series fires back into life this weekend with its showpiece Daytona 500.

The Great American Race will break the Australian’s run of 184 consecutive starts in the Sprint Cup, stretching back to late 2008.

This year’s Daytona race comes just a week before Ambrose officially kicks off his new V8 Supercars venture with DJR Team Penske at the Clipsal 500 Adelaide.

Following a busy off-season relocating his family from the United States, Ambrose says he’ll be taking it easy when his former rivals are racing at Daytona on Monday morning (Australian time), but he won’t be in front of the TV.

“I’m going to go fishing and I’ll check the results at the end,” the now Launceston, Tasmania-based Ambrose told Speedcafe.com of Daytona.

“It’s not that I don’t want to watch it, it’s just that I’ve got other things to look forward to and I’m really looking forward to my V8 Supercar season.

“I don’t have any regrets or ill feeling wishing that I was there competing in it. I’ve done quite a few Daytona 500s, they are always a great event.

“(But) I’ve got a really big week, next week. I’ve got a couple of days R&R so I just want to de-stress and not think too much about what is coming up.

“I wish my old team (Richard Petty Motorsport) the best and I wish my new team-mates (at Penske) the best, but I’ll probably just watch the highlights reel on YouTube.”

While the 300km/h restrictor plate tracks proved a world away from the road courses Ambrose had grown up with in Australia, the now 38-year-old insists he enjoyed the unique style of racing.

Drivers spend green flag running during the 500 miles flat-out, listening to instructions from trackside spotters as they try to find the right ‘lanes’ and ‘drafting partners’ with which to move forward in the pack.

All the while they must be braced for ‘the big one’; accidents where as much as half the field can be wiped out in one crash.

“It is not a lottery at all,” insists Ambrose of Daytona.

“I mean, you can get taken out randomly but the winner always deserves to win that race.

“You work that out pretty quick when you are in there seeing what cars are working well and what cars have the advantage.

“There are advantages to be had in super speedway racing, but it takes a lot of time and money to get those advantages.

“The best teams will find a way to get to the front and win those races.”

Ambrose has been a beacon of positivity since returning from the United States, his smile beaming as he speaks enthusiastically of DJR Team Penske’s V8 Supercars effort and the challenges ahead.

Direct questions on his NASCAR career, which failed to yield a single oval track win in nine years of racing across the Truck, Xfinity (formerly Nationwide) and Sprint Cup tiers, bring a rather contrasting demeanour.

“I had my chances to win,” he deadpans.

“A lot of things go on (in a race) and the fact is I didn’t win and there’s not much more to be said than that,” he adds only after further probing.

“I’m not saying I didn’t have the right equipment or the right people, I’m saying I just didn’t get it done.”

Upon announcing his retirement from NASCAR last year, Ambrose spoke at length about his career trajectory in the US having “flattened off”.

After six seasons in the Sprint Cup, it was abundantly clear that an opportunity with one of the major players, such as the Roush Fenway Ford team of which RPM is a customer, would not be forthcoming.

Having boldly signalled intentions to leave his first Cup ride at JTG Daugherty without a firm drive elsewhere back in 2009, the Australian signed with RPM when the team was on the brink of collapse.

A rescue deal that included a change of ownership followed Ambrose’s commitment and, while links with Roush and Ford yielded solid equipment, resources remained a long way from that enjoyed at the leading teams.

Despite missing out on an oval win or coveted Chase place, Ambrose dragged RPM to its greatest highs in years with his multiple wins at the Watkins Glen road course in both the Xfinity and Cup Series.

His departure last year coincided with that of major Sponsor Stanley Dewalt, which had elected to link with former Roush driver Carl Edwards at Joe Gibbs Racing for 2015.

That move has left the now Sam Hornish driven #9 RPM entry well underfunded, with sponsorship only currently confirmed for a portion of the season’s 36 races.

Ambrose affirms, however, that the opportunity existed for him to continue with RPM into 2015 if he had wanted.

“It was creeping up and the timing was right to stop,” he said of a long-time desire to eventually return home to Tasmania with his young family.

“I worked with the team for a long period to do the crossover. It’s bigger than the driver. You can’t just decide ‘okay, today I’m going to stop’.

“You’ve got obligations and commitments to employees and their families and sponsors and it takes a while to unwind yourself out of that process.”

Ambrose has repeatedly insisted that he holds no interest in returning to NASCAR for its two road course races this season.

Neither Sonoma in June or Watkins Glen in August clash with a V8 Supercars event, leaving many hopeful that Roger Penske will add a third Team Penske Ford Fusion for the two races.

Penske will be on hand to see Ambrose in action at the Clipsal 500, flying to Australia after watching his chargers Brad Keselowski and Joey Logano tackle the Daytona 500.