Maldonado puts Lotus back on top in Barcelona

Maldonado puts Lotus back on top in Barcelona 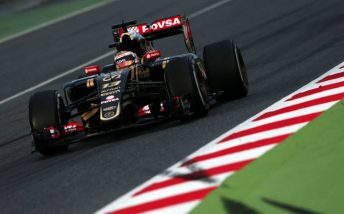 Pastor Maldonado set the pace on day 3 at Barcelona

The Venezuelan driver clocked 104 laps at the Catalunya circuit with an afternoon run on the super-soft tyres yielding a session best time of 1.24.348s.

Maldonado’s effort was 0.391s quicker than his nearest rival Max Verstappen, who also posted his personal best on the super-soft compound.

The Dutch teenager completed the most mileage with the new Toro Rosso recruit racking up 129 laps overall.

Still battling a fever, Mercedes’ Lewis Hamilton was third fastest as the Brit focussed his day around suspension and aerodynamic development work on the W06.

The reigning world champion completed 101 laps on medium compound tyres with his best time 1.728s adrift of the pace set by Maldonado.

“I’m definitely not 100 percent and I’m looking forward to going home tonight and sleeping for the next couple of days,” said Hamilton.

“It was a hard day out there physically – but I’ll make sure I’m better for next week and come back stronger.

Sauber continued to show strong pace as Marcus Ericsson ended the day fourth fastest despite losing much of the morning session due to a gearbox issue.

Ericsson was marginally quicker than Red Bull Racing’s Daniil Kvyat and Ferrari’s Sebastian Vettel. The latter completed 105 laps despite suffering a spin on his out lap.

A new seal designed to solve the MGU-K issue suffered earlier in the week failed leaving Button to circulate with reduced power.

Elsewhere, Felipe Massa and Valtteri Bottas enjoyed spells behind the wheel of the Williams FW37 with the Brazilian pipping the Finn on the time sheets.