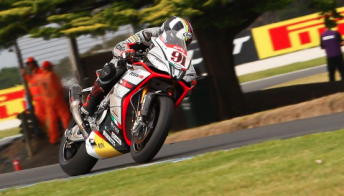 The Aprilia rider pipped the race one winner by the finest of margins at the chequered flag as the pair resumed their battle from the earlier contest.

Haslam spent the first half of the race as a watching brief until the Englishman sprung into the lead on lap 12.

However, the advantage was short-lived as early race leader Rea and Aruba.it Racing Ducati’s Chaz Davies both enjoyed spells at the front as the race ticked towards the final laps.

The climax proved to be a repeat of Race 1 with Rea and Haslam going head-to-head on the final lap, but this time the Aprilia outdragged the Northern Irishman to take the win by just 0.010s.

The victory ended a drought stretching back to Kyalami in 2010.

“What a fantastic day,” said Haslam.

“All the hard work, all the broken bones, all the operations  over the past few years – it makes it all up for it just this one victory.”

Davies was forced to settle for third once again ahead of 2013 world champion Tom Sykes on the factory Kawasaki, while reigning champion Sylvain Guintoli was fifth for Pata Honda.

The race was not without incident as Pata Honda’s Michael van der Mark crashed out of fourth place just minutes after taking the lead of the race with an audacious move on lap seven.

Australia’s Troy Bayliss finished outside of the points in 16th position having made a pit stop for a new front tyre in the second half of the encounter.

The former three-time world champion impressed in the early stages with the Ducati man challenging Sykes for a place in the top six.

“It’s been a strange one to come back after so many years,” said Bayliss.

“I did this comeback for a lot of reasons, and in the end I made some really good progress — but still I am actually a little bit pissed off, which proves that I am still a racer.”

Meanwhile, David Salom is expected to return to action at the next round of the world championship held at Thailand on March 22 following his high speed accident during qualifying.

The Spanish rider sustained concussion and a broken finger in the crash.

“The crash was really a big one,” said Salom.

“I thought my conditions were OK to try and get on track for the Warm Up, but the doctors’ opinion was not the same.

“Surely my safety and my health are more important, I think I’ll be good to go for Thailand. I have a broken bone in my hand and once I’ll be back.”

The Frenchman completed a comfortable win over Lorenzo Zanetti and Gino Rea to join Sebastien Charpentier and Kenan Sofuoglu in the record books.

In the Australian Supersport category, Michael Blair took the honours while South Australia’s Olly Simpson picked up his third victory of the weekend in the 125cc/Moto3 class.