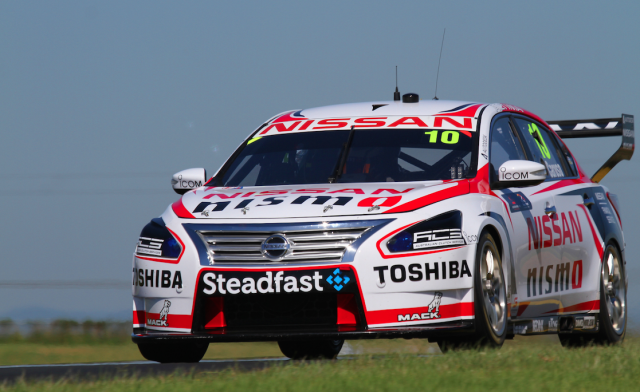 Nissan Australia CEO Richard Emery says his company plans to decide its strategy for V8 Supercars’ new-for-2017 Gen2 regulations by the middle of this year.

V8 Supercars confirmed in December that it will open up its rule book in 2017, allowing two-door body shapes and a variety of engine configurations into the championship.

Nissan is currently only committed to the category until the end of 2016 but, with the brand currently in the midst of a global motorsport push, is expected to remain for the new era.

The company has lifted its support for the Kelly family owned Nissan Motorsport this year, running a car with a factory Nissan Nismo livery, as well as pushing a crucial engine upgrade through its North American supply chain.

“In just the same way that V8 Supercars had a white paper, we’re going to do the same thing,” Emery told Speedcafe.com.

“We would like to have ours completed by mid-year together with headquarters about motorsport in Australia and the program that we want to take on from 2017 onwards.

“The options that V8 Supercars’ white paper give us are quite broad and it’s not a simple discussion for us. The decision is about 2018, ’19 and ’20 in terms of the product line-up and things like that.

“There are a lot of factors in play which is why we’re going to have a broad group of people involved including Darren Cox and the global motorsport guys, plus people out of Nismo in Japan.”

News of the broadened V8 Supercars rules has many expecting Nissan to switch its focus to turbo technology more in-line with Nismo’s expertise.

While Nismo already has a GT3 racing tuned twin-turbo V6 in its arsenal, Emery has expressed caution over making major changes to the current racing platform.

The Japanese marque has endured a difficult first two seasons in V8 Supercars as it has helped blaze the trail for four-valve V8 engines under the Car of the Future.

V8 Supercars says it will have the finer points of its Gen2 regulations and related methods for controlling parity solidified by the middle of this year in order to help manufacturers make early decisions about their plans.

Emery stresses that any push from Nissan towards introducing new technologies into the category would leave it vulnerable to parity issues that may arise under V8 Supercars’ new open era.

“I’m not sure I want to push the envelope again in 2017 after our first two years in this program were so fraught,” said Emery.

“We’re going to have a fully developed V8 car that by 2016 we’d like to think will be a front-runner.

“If the brand (Nissan global) says ‘Richard, we want to be innovative and bring the program closer into what we’re doing globally’, then there are some risks that come with that.

“I’m not sure that V8 Supercars have got enough time to have a fair parity position for Clipsal, 2017.

“If there’s a wide variety of cars and engine combinations at Clipsal in 2017, we might be the odd ones out and miles away. I don’t really want to go through that again after our 2013 experience.

“We’ve got to balance getting results, being innovative and building on where we’re going to get to over the next 18 months.

“The absolute deadline for us will be the third quarter of this year. If you haven’t decided by then, you won’t be ready.

“I just hope that V8 Supercars will have concrete rules in place by mid-year, because we can make some decisions once we know what their position is.”

Emery says that Nissan will have made a firm decision on the future of the Altima road car by the time the direction of the racing program is set.

The Altima model was introduced to the public through the V8 Supercars program almost a year ahead of hitting showrooms in late 2013, but is no certainty to continue beyond its current generation.

The company continues to evaluate introducing the next generation Maxima, which is unlikely to be sold alongside an Altima.

“The large sedan segment of the Australian car market is a diminishing market position,” said Emery.

“There’s Altima, Maxima and some other products as well that appear under different brand names.

“There are a number of cars that we could use (for racing), and you can throw GT-R into that too.

“I wouldn’t say now that I’m wedded to Altima being the platform for Supercars, but we’ll make that decision as part of this process.”

The Altima accounted for less than 2,000 of Nissan Australia’s 66,000 sales last year, with its line-up led by the Navara pick-up truck, X-Trail SUV and Pulsar.