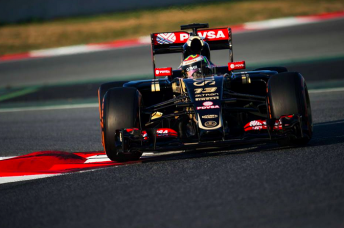 Venezuelan driver Pastor Maldonado gave Lotus some glory by topping times on Day 1 of the Barcelona test, which saw a nasty collision between Susie Wolff and Felipe Nasr.

Wolff (Williams), who had logged 86 laps, and Nasr (Sauber) collided at Turn 5 of the circuit, both blamed each other for the incident.

Neither driver was injured in the crash which saw Nasr collect the tyre barriers and Wolff come to rest in the gravel trap.

Wolff was on an out lap while Nasr was on a flyer at the time of the incident.

The session saw Maldonado use soft Pirellis to set a benchmark of 1:25.011s to dislodge Ferrari’s Kimi Raikkonen who recorded 1:25.167s on medium compound tyres.

The day ended early for Mercedes’ reigning world champion Lewis Hamilton who was forced to stand down after covering just 11 laps when he succumbed to a heavy fever.

It meant that Pascal Wehrlein had to be summoned back from testing with Force India to fill Hamilton’s Mercedes.

After the team took time to make the necessary adjustments in the car to accommodate Wehrlein, the driver ended the day with the eighth fastest time.

Seventh was Jenson Button with McLaren-Honda forced to switch engines after a fault was found with a seal on the MGU-K.

It is likely that McLaren may have to wait until the weekend before a replacement part is fitted.