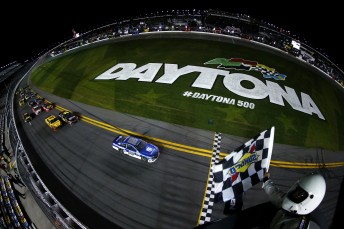 After Jeff Gordon and Johnson scored the front-row from qualifying earlier in the week, the rest of the field was set in two separate 150 mile (60 lap) races.

The final order was locked in on a combination of the Duel race results, owners points, previous champions provisional and qualifying speeds.

While owners points made an easy ride for the majority of the stars, there was a group of well known drivers that had either changed teams in the off-season, such as Carl Edwards, or in the case of Danica Patrick, had not scored enough points in 2014 to automatically qualify.

Patrick nearly missed the Daytona 500 after a late wreck with Denny Hamlin. However, she rallied during a green-white-chequered finish from 18th to 10th to make the field for Sunday’s race.

After also crashing in practice after contact from Hamlin, Patrick vented her anger on the pitlane in front of reporters and camera crews.

Hamlin, with his right-arm around Patrick’s shoulders, defended his on-track moves by telling his rival that her car is simply set-up too loose to handle the close-quarter drafting.

“Nobody has your back like I have, but I can’t give you an extra two feet because it’s you,” he told Patrick.

“It’s not my problem if you’re loose… nobody else is getting close to you. To get you going forward I have to get close to you.”

“I get being close,” Patrick told the media afterward, “but he’s then going to my left-rear and it just gets it light and it spun around.

“I like to race hard but there’s no point being out there wrecking each other. I just wanted to let him know I was disappointed.”

A two-time winner of the Daytona 500, Earnhardt Jr. won a Daytona Duel race for the fourth time in his career.

Earnhardt Jr. started the race from the back of the field after his car failed post-qualifying inspection on Sunday.

For Johnson, it was his second career win the a Daytona Duel race. Johnson already had a front row starting spot locked up based on his qualifying effort on Sunday.

A number of wrecks in each Duel added to the tension for those trying to make Sunday’s field.

Alex Bowman, Jeb Burton, Ron Hornaday Jr., Justin Marks, Brian Scott and Josh Wise were those to miss out on an entry into The Great American Race.