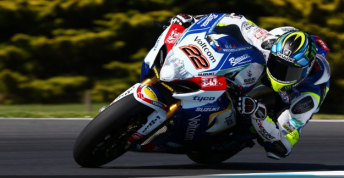 Alex Lowes has maintained his edge by acing practice going into the opening round of the World Superbike Championship at Phillip Island.

Following his fast form in testing earlier in the week, Lowes managed a 1:30.855s lap in the first of the twin sessions which stood for the duration of the day.

The VOLTCOM Crescent Suzuki rider outdid Jordi Torres who clocked 1:31.214s on his Aprilia RSV4-RF while Tom Sykes was third fastest on a Kawasaki ZX-10R.

Bayliss was called up at the last minute to ride the Ducati Panigale R to replace the injured Davide Guigliano who crashed at the Victorian circuit last Monday.

The Gold Coast 45-year-old spent time sorting through the best set-up for the Ducati.

Leon Haslam (Aprilia RSV4-R4) was one of few riders to have bettered their time in the opening run, his mark of 1:31.466 maintaining his place as fourth in the order.

Michael van der Mark (Honda) vaulted from 12th in the opening practice session to end up seventh after putting in a 1:31.693s lap during the final segment.