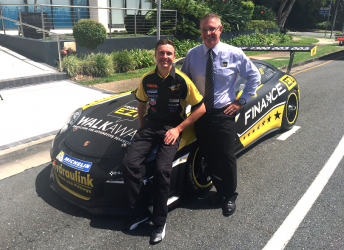 The deal marks Russell’s first full-time Carrera Cup seat since 2008, where he finished third in the championship, and his first complete season in any category in four years.

The 33-year-old proved an instant front-runner when filling in for Roger Lago at last year’s Bathurst and Gold Coast Carrera Cup races and is expected to be a strong contender for the title.

“It is fantastic to be back in the Carrera Cup championship and to be in a position to have a real tilt at the title with Finance Ezi Racing,” said Russell.

“I took some heat over how aggressively I was competing at Bathurst and the Gold Coast last season, (but) that was just a taste of what can be expected from me once the red lights go out at the Clipsal 500.”

Russell started his racing season at the recent Bathurst 12 Hour, finishing seventh alongside Lago and Steve Owen in the JBS Lamborghini.

He is again expected to line-up alongside Rick Kelly for Nissan Motorsport’s Pirtek Enduro Cup campaign later this year.