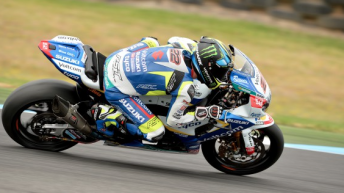 Crescent Suzuki’s Alex Lowes set a blistering pace to top the time sheets in the final day of testing ahead of the World Superbike Championship opener at Phillip Island.

The former British Superbike champion boosted his confidence leading into the first round of the season by posting a 1:30.8890s effort around the 4.4km Victorian circuit.

The trio were separated by just 0.112s at the close of the test.

Davies team-mate Davide Giugliano was absent from the test following a heavy fall during Monday’s running.

The Italian, who was transferred to Alfred Hospital in Melbourne, sustained two fractured vertebrae which has ruled him out of this weekend’s opening round.

“Having taken a blow to the lumbar region of his back, the doctors at the medical centre decided to transfer him to Alfred Hospital in Melbourne to carry out a CAT scan,” read a team statement.

‘Unfortunately the scan has revealed two small fractures of the L1 and L2 vertebrae, not serious but which may prevent Davide from competing this coming weekend.”

Reigning world champion Sylvain Guintoli suffered a fall in the dying minutes of the session as he ended the day in 11th position.

Honda rider Glenn Scott was the best of the Australians in 16th spot ahead Alex Phillis in 17th with Sam Lambert in 22nd.