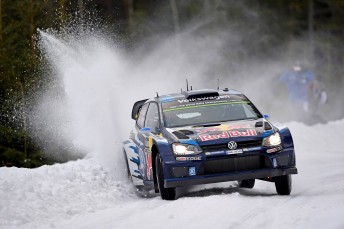 Ogier blitzed the final stage to win in Sweden

Teammate Andreas Mikkelsen held a 3.0sec advantage going into the closing 15.87km Power Stage and was looking to score his maiden win in the World Rally Championship.

The young Norwegian maintained the lead until the final third of the stage, when his Volkswagen Polo R touched a snowbank and spun.

The time Mikkelsen lost recovering was enough to confirm a second straight 2015 victory for Ogier, who also won the Power Stage and its bonus points with a blazing drive 5.0sec faster than second-placed Thierry Neuville in a Hyundai.

“This was one of the most exciting WRC events,” he said. “It’s a crazy win because I had to push flat out from the beginning of the rally to the end. My first win here two years ago was a hard fight, but I had to play everything here in the final stage and it was a fantastic end. Andreas did a great job and he’s very young so we’ll have many more future battles.

“I made only one mistake on Friday and apart from that I’m proud to have kept the car on the road at that level of speed,” added Ogier.

Neuville, Ogier and Mikkelsen started the last stage with merely 4.6sec between them after more than 290kms’ racing since Thursday night across a spectacular winter landscape in Sweden and Norway.

The Belgian Neuville had led overnight in his i20 after winning the final speed test on Saturday and ending a run of 10 straight wins by Mikkelsen, who had caught another snowbank while under pressure from his rivals.

Mikkelsen regained the lead on the first of Sunday’s three stages, stalked from third spot and then second by the maestro Ogier, who exclaimed jubilantly at the finish he had driven “flat out” to take the final step to the top of the podium.

Neuville finished the Power Stage and the rally in second place, 6.4sec behind Ogier, while Mikkelsen was relegated to third, a further 33.4sec back.

Ogier now has a big early lead in his points chase for a third straight title. Neuville and Mikkelsen are equal-second while the third Volkswagen driver, Jari-Matti Latvala, remains fourth in the standings despite scoring no points in Sweden.

Belgian Ott Tanak drove a steady event to finish fourth for his Ford-powered M-Sport team, while New Zealander Hayden Paddon scored the best finish of his short WRC career, fifth in a Hyundai i20. “I’m really happy,” said Paddon. “To get in the top five is much more than we expected going into this rally. It’s been a good rally for us overall and very important to gain the experience in these demanding winter conditions.

“This year conditions are probably the best they’ve been here for many years. There was a lot of snow before the rally, so there are really good snow banks and I guess that’s been encouraging drivers to drive fast, to really lean on the snow banks. At the same time that’s a catch 22, that’s what’s been catching some drivers out, including ourselves in some circumstances.”

After two winter rallies to start the season, drivers in the world’s toughest championship tackle conditions at the opposite extreme for round three, the rough gravel roads and power-sapping Andean altitude of Rally Guanajuato Mexico on 5-8 March.