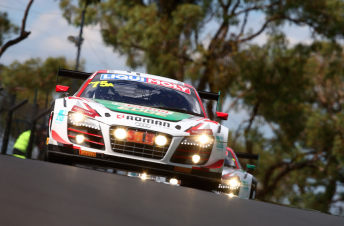 Johnson will co-drive the #75 Audi

Johnson has inked a deal to race in Steve McLaughlan’s two-car Jamec Pem Audi squad in the full six-round series.

The 40-year-old Johnson will co-drive with McLaughlan in the team’s #75 entry.

The car will be prepared by the Melbourne Performance Centre alongside the sister #74 R8 of Greg Crick and German factory Audi driver Christopher Mies.

Canto meanwhile will drive with South Australian businessman Andrew Taplin for the season.

Fresh from an appearance with Erebus Motorsport at the Bathurst 12 Hour, Canto will be sharing Taplin’s Aston Martin, prepared by the Adelaide-based Buik Motorworks.

“I’m really pumped to be joining Andrew in the series,” said Canto.

“It will be a different GT car to what I have previously driven but it has a steering wheel and some pedals and that’s all I’m worried about.

“The category has some strong competition this year and I’m looking forward to some awesome racing.”

Canto is set to return to the Pirtek Enduro Cup with The Bottle-O Racing later this year, while Johnson remains on the hunt for a seat following DJR Team Penske’s move back to a single car.

The Australian GT Championship will kick-off later this month at the Clipsal 500 Adelaide.