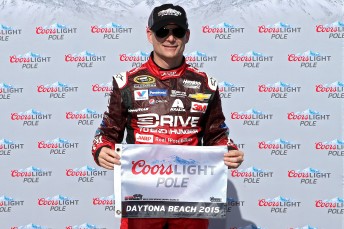 Gordon with his second pole for the Daytona 500

Jeff Gordon may have announced that 2015 will be his final fulltime season in the NASCAR Sprint Cup, but that had little effect as he scored pole for the Daytona 500.

In a further sign of strength he will be joined on the front row by Hendrick Motorsports team-mate Jimmie Johnson.

It was the first time in history that group qualifying was used for the Daytona 500. It consisted of three rounds of knockout qualifying, which left 12 drivers competing in the final five-minute round.

“This is one of the more gratifying poles here at Daytona that I’ve ever had, not just because it’s my final Daytona 500 but because you’ve got to try and plan it out and play that chess match and play it really, really well,” Gordon said.

“It’s NASCAR’s fault for putting us out in the middle of this crap for nothing,” Bowyer said.

“We used to come down here and worry about who would sit on the front row in the biggest race of the year.

“Now all we do is come down here and worry about how a start-and-park like this out of desperation is going to knock us out of the Daytona 500. 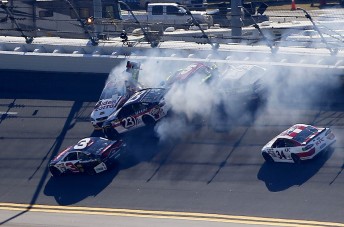 A big crash early left a number of drivers furious

“We’ve been in meetings for 45 minutes just trying to figure out what in the hell everybody is going to do just so we can make the race. It’s stupid.”

The dramas were not limited to the track with Denny Hamlin and Dale Earnhardt Jr. both having their cars excluded following post-qualifying technical inspection.

Earnhardt’s car was found to be too low on the left front. He will have to start 25th in Thursday’s first Duel.

Hamlin’s car failed inspection because his track car had a split that was too wide. The maximum split is 3.0 inches; Hamlin’s measured 3.75, NASCAR officials said. Hamlin will start 24th in the second Duel on Thursday.

With front row set, the remaining 47 entered drivers will battle for the other 41 positions in the Daytona 500 during Thursday’s Daytona Duels.

Today’s qualifying determined only the front row for the Daytona 500. Starting positions 3-43 will be determined in the Duel qualifying races.

The top-15 finishers in each Duel will be locked into positions 3-32 in the Daytona 500 field.

Positions 33-36 will go to the four cars that were fastest in qualifying but failed to the race their way in via the Duels.

Positions 37-42 will be based on owner points from last year. Position 43 will go to a past NASCAR Sprint Cup Series champion who otherwise failed to qualify. If that slot is not needed, it be awarded via owner points.