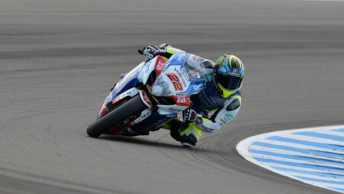 Alex Lowes upstaged the field with two minutes remaining to set the quickest time on the first of a two-day test ahead of the World Superbike Championship’s opening round at Phillip Island this weekend.

Leon Haslam also emerged late with an improved time, his 1:31.692s edging Tom Sykes who was fourth on overall classifications.

The Aruba.it Racing – Ducati team rider Guigliano crashed at Turn 11 early in the afternoon session before taking no further part in the day.

Aiden Wagner, the Australian Supersport champ was sixth overall after setting the fourth fastest time in the first segment of testing.