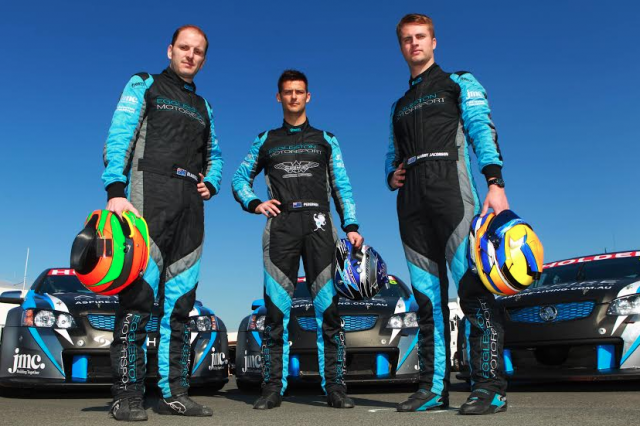 From left: Dumbrell, Pedersen and Jacobson return to Eggleston Motorsport for 2015

Paul Dumbrell will lead an unchanged three-driver line-up at Eggleston Motorsport this season as he aims for a second consecutive Dunlop Series crown.

The 32-year-old has confirmed his return to the second-tier V8 Supercars series, preparing for another Pirtek Enduro Cup campaign with Jamie Whincup and Triple Eight.

Dumbrell’s Eggleston Holden will sport the #1 this year as part of new regulations allowing the Dunlop Series competitors a number pool independent of the V8 Supercars Championship.

The Dunlop season will kick-off at the Clipsal 500 Adelaide later this month, where a host of rising stars will again attempt to best the experienced Dumbrell.

Prodrive’s Cameron Waters looms as the former Bathurst winner’s biggest threat, with the 20-year-old attacking his fourth Dunlop campaign ahead of an enduro berth with the team’s Pepsi Max Crew. Dumbrell will run the #1 under the new numbering scheme

Amid the outside competition, Dumbrell believes that his two returning team-mates, Garry Jacobson and Ant Pedersen, could prove his toughest rivals of all.

“After such a successful campaign in 2014 it is a privilege to come back to the EMS team again in 2015 and be able to wear the number 1,” said Dumbrell, who also won the title in 2002.

“This season is going to present a lot challenges with a lot of competition for the 2015 title.

“With Garry and Ant being in their second year with the team, both will no doubt start challenging for podium and wins throughout the year. I look forward to fighting with them for race wins.”

Pedersen and Jacobson finished 10th and 11th in last year’s Dunlop Series respectively, with the latter scoring a single podium at Winton in April.

Jacobson started his racing year with a class win aboard a MARC Focus V8 at the Bathurst 12 Hours a week ago and is now into his third Dunlop season.

“Both Ant and Garry showed great speed at times, but their overall results were not a true reflection of their driving talent,” she said of last year.

“Having the same drivers means that we go back to each track and literally start where we left off in 2014 and build on what we all learned.

“We are very serious about showing that we have the best cars, team and drivers in the V8 Supercars Dunlop Series and will come out firing at round one.”

The Pedersen and and Jacobson cars will contain to campaign Eggleston’s traditional numbers #38 and #54 respectively.

It has already confirmed that Formula Ford racer Liam McAdam will graduate to the Kumho class in one of its entries this year.