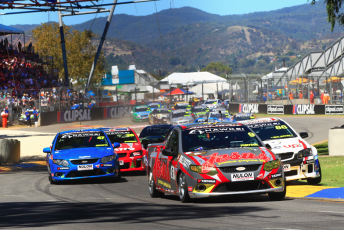 The V8 Ute Racing Series will again kick-off in Adelaide

The V8 Ute Racing Series will introduce a success ballast system this season in a move to tighten the competition.

The top three drivers in the points standings heading into each round will be forced to carry the ballast.

A 40kg penalty will be levied to the series leader, with 30kg for second and 20kg for third.

The ballast will remain for the entirety of the round, regardless of race results, before resetting after each event.

“The series has always been about entertainment and I think adding a bit of weight to each driver will close up the racing a little more and ensure that no one team dominates all rounds,” said category manager Bill West.

“Each team will have the opportunity to set their car up to the corresponding weight between rounds, so it will be a nice challenge for all involved and will really bring out the skills of teams and the driver.”

No weight will be awarded for the first or final rounds, with the latter helping ensure that no drivers ‘sandbag’ at the penultimate event.

“It’s only fair that all weight comes out prior to the final round, so the top drivers can all fight out the title on equal terms,” added West.

The ballast being carried will be made obvious to fans by a coloured sticker on each of the effected Utes.

Reigning V8 Ute Series winner Kris Walton admits to having mixed feelings about the move, but agrees it will spice up the competition.

“It will definitely tighten up the championship, there’s no doubt about that,” said Walton.

“I think with the ballast it will definitely throw a spanner in the works and with the new racing format it will throw the whole season up in the air.

“I’m not sure I think it’s a good idea if I’m winning, but if I’m fast enough I can deal with it. No matter what it will make for an interesting year.”

The 2015 V8 Ute Racing Series will kick-off at the Clipsal 500 later this month, where the category will begin its last season under its current regulations with a special Ford versus Holden race format.