David Wall has declared team-mate Scott McLaughlin’s pace as “nothing to be scared of” as the new Volvo recruit embarks on a career-defining season.

The 32-year-old Wall had his first outing aboard the #34 Volvo S60 V8 Supercar at last weekend’s Sydney SuperTest.

It proved a weekend of mixed fortunes for Wall after his Saturday running was hampered by brake and rattle-gun problems, of which the latter resulted in having a wheel come off on track.

A mistake in Sunday’s Armor All Shootout left Wall 21st on the final time sheets; a full 2.5s away from fifth-placed McLaughlin. While the deficit was not a true reflection of his speed, Wall admits that he faces a stiff challenge to keep pace with his team-mate, who scored 10 pole positions in 2014.

Comparisons between the two will be frequent following Wall’s arrival at the team alongside sponsors Wilson Security and Payce Consolidated on a ‘one year plus option’ deal.

“At some stage that’s going to happen,” Wall told Speedcafe.com of shaping up against a team-mate like McLaughlin, who left rookie Robert Dahlgren in his dust last season.

“I’m not here to make up numbers. The whole goal is to drive in a team that’s capable of winning and having a good team-mate is part of that.

“Scott is absolutely a good yardstick and hopefully I can be close to him as the year goes on.

“On Saturday I was three and a half to four tenths off. I hope to have at least halved that by the end of the year.

“There’s nothing to be scared of, we just need to get on with it and do the job.”

Wall is full of praise for the 21-year-old’s attitude and assistance in getting him acclimatised to the car.

“How he comes across on TV is exactly who he is. He’s obviously very fast, but he’s straight down the line and has been very open about how to drive the car.

“I asked a lot of questions before the weekend and everything he said was exactly true when we got onto the track. It’s just up to me to get it all right.”

The Volvo raised eyebrows for the strength of its engine and aero when it debuted 12 months ago; the package proving good enough for a podium first time out in Adelaide. 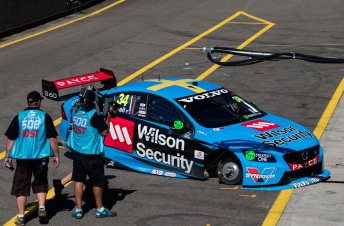 While key rivals have since made gains in both areas, the S60 is still a hugely formidable package and one that Wall will have to work at to get the most out of.

“The car is a pleasure to drive, it’s very, very nice, but it’s got its own bits and pieces that it needs to be quick,” he said.

“It’s always a compromise between adapting the car or your own style, but I feel that the way I drive is pretty close to what it needs.

“It’s very strong to an apex. That’s something I haven’t had in this category in the past, but it’s more like where I’ve come from in GT and Porsches.

“That’s an adjustment for me to get to how it likes to be driven and every lap we did at the weekend was just refining my driving.”

Wall already has three full-time V8 Supercars seasons under his belt, spending two with Brad Jones Racing and one with Dick Johnson Racing for a best championship result of 21st.

The Sydneysider says he wants to establish himself as a consistent top 10 runner this season, starting in Adelaide.

“We were eighth on the Sunday last year and while I’d be satisfied if I was there, I’d like to be further up than that,” he said.