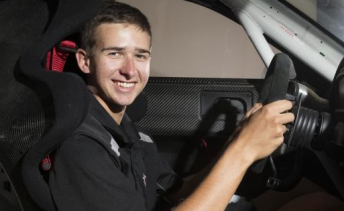 The 19-year-old spent last season racing in the GT3 Cup Challenge with McElrea, winning the Class B title.

He then stepped up to a Class A entry for the Phillip Island season finale, winning all three races.

“To be able to race in the Porsche Carrera Cup championship is a truly amazing opportunity for me,” said Campbell.

“I’ve followed the championship closely for many years and admired the talents of the top drivers. It will now be surreal to line up against these drivers on the Carrera Cup grid.

“I felt very comfortable in the Porsche by the end of last season. Moving into the 991 GT3 Cup car will be another big challenge but hopefully one made easier with tuition from Warren Luff throughout the season.

“I’m not expecting to be at the front straight away though hopefully I can move in that direction throughout the season.”

Luff, who finished second in last year’s Carrera Cup, will not return to the class this year, but will remain involved in the team, which also runs cars in the Australian GT Championship.

He will also return to the Pirtek Enduro Cup later in the year, partnering Garth Tander at the Holden Racing Team.