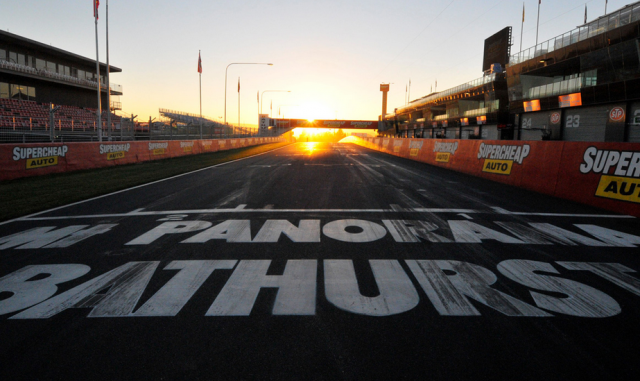 Bathurst hopes to take the next step in developing a second circuit at Mount Panorama and has targeted a return of world championship motorcycle racing to the city.

The Bathurst Regional Council is keen to finalise its next move for a world class motor sport precinct ahead of the local government elections set for September 2016.

Mayor Gary Rush told Speedcafe.com the council is close to securing an additional parcel of land ahead of moving into final design plans for the venue located on the eastern side of Conrod Straight.

Cr Rush said his council is keen to court MotoGP and World Superbike rounds to a new venue.

The council has started a relationship with Dorna, the commercial rights holder for MotoGP.

Bathurst will seek input from Dorna into the circuit design in a quest to have a genuine international class motorcycling venue.

“It’s pretty well known that we would be keen to get two wheel racing back here to Bathurst,” Cr Rush said.

“Bathurst has a long and rich history in motorcycle racing.

“The Superbikes and the MotoGP both being held at Phillip Island, we are very keen to get our hands on both of those events.

“That is what we are gearing towards; we want to bring two wheel racing back to Bathurst.”

The central western NSW city was recently given a $5 million grant by the state government which will be immediately put to initial design work of a second motor racing circuit.

“We’ve got one crack at this not only in a physical sense but a perception sense,” Cr Rush told Speedcafe.com

“If we can’t deliver up something then I’m pretty sure the motor racing enthusiasts around the country and around the world will soon work out that it hasn’t been the appropriately designed facility that they were hoping for.

“As a group of councillors we will sit down over the next month or two with regard to the budget for the next financial year and within that budget we have a significant allocation of funds devoted toward the construction of the second circuit as we have for the year after.

“I think there is a quiet determination but it really does depend on completing that land acquisition strategy first and foremost.

“The area is on the eastern side of Conrod Straight. Council do own quite a bit of the necessary land already.”

A second circuit would include a full automotive business precinct with the track layout either used standalone or move to international specification and incorporate elements of the Mount Panorama circuit, pit straight and parts of Conrod and Mountain Straight.

“That might be the first stage of the facility but what we are planning for is a 20 or 30 year project because we do anticipate that there will be sufficient infrastructure and ancillary industry that will come with this,” Cr Rush said.

“It’s about getting two wheels and four wheels on the track and also too what sort of industry is going to be associated with this and the economic benefit it brings.

“What we want to do is have enough land to build an international facility so we are looking down the barrel of the completion of that strategy.

“We are not quite there yet but once we have fulfilled that strategy we will obviously look at very quickly and rapidly getting onto the design of a second circuit for Bathurst and the Mount Panorama precinct.

“It’s not a lot of land that we have to complete because it’s not a necessary part of the jigsaw.

Some of the preliminaries associated with the design work including noise impact have already started.