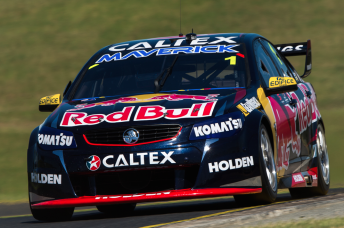 While the results of the four sessions were largely determined by pre-marked tyre condition, Lowndes and Whincup surprisingly managed only eighth and 12th respectively in Sunday afternoon’s Shootout, where all drivers ran new hard compound tyres.

“It was a bit of driver, a bit of car, a bit of Christmas pudding…” smiled Whincup when asked of his uncharacteristically poor run in the Shootout.

“It’s so competitive, if you just miss the mark you’re miles back. That’s what the category is all about.”

Whincup stressed that the Red Bull team’s poor pre-marked tyre quality had been the major factor in the remainder of the weekend’s running.

“I’m not concerned,” he said of the session results.

“We were just doing our thing, running through our test plan and we were able to do that successfully with the tyres we had.” 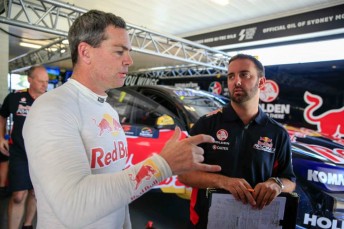 The team utilised the test to trial a number of different set-up directions that it had not been game to try at race meetings, which last year featured only short practice sessions.

It also ran a number of new parts, including Red Bull technical director Ludo Lacroix’s latest aerodynamic package, which was sported by all Holdens for the first time in Sydney.

The aero upgrades centred around a minor revision to the rear wing position, which is now further back and further up into the clean air stream in a bid to reduce drag.

In similar changes to that seen on the Nissan ahead of last year, a small front under-tray extension was also added to the Commodore to counteract the centre-of-pressure change brought about by the revised rear-wing position.

While the Holden drivers reported little in the way of handling changes from the new package, Whincup noted a somewhat unintended consequence from moving the wing.

Lowndes was typically upbeat about his weekend, which had seen him working with ex-Prodrive engineer Grant McPherson for the first time.

“I’m still confident even though we’re obviously not fast enough at the moment, but our feeling in the car and feeling working with Grant has been fantastic,” he said.

“I’m quietly confident, we’re making inroads and obviously taking steps towards making it a faster car and trying to tune it up for qualifying.

“I think our race pace will still be very good and very competitive. All in all, I’m delighted; we’re in good shape and a good position and looking forward to Clipsal.”