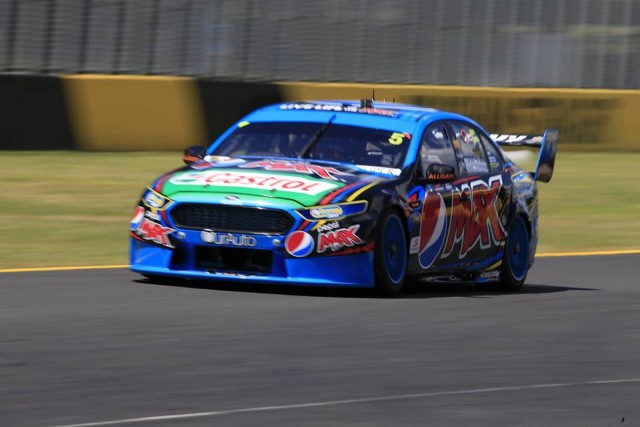 Winterbottom moved into top spot with a 1:29.58s lap in the final five minutes of the session, having spent the bulk of the two hours on the cusp of the top 10.

Winterbottom, who was cautiously optimistic about the gains made with the new model Ford following yesterday’s running, bolted on a used set of pre-marked softs to set the quickest time.

“The guys did a lot of work overnight because yesterday we were struggling a little bit,” Winterbottom told Speedcafe.com.

“This morning felt quite good. Although the tyres get older, you feel like you’re making gains. We’ve had good tyre life and today it started to feel the way we want it to.

“It was a good session and it was good for a first time with a new engineer (Jason Gray) to make such progress over night.

“The tyres we did the time on were softs that had done about 120km. The guys analyse it all but you never really know what the grip will be like until you’re out there turning the wheel.

“We’ll see if the green hard makes a difference,” he added ahead of this afternoon’s Shootout, which will see all cars on new hard tyres.

“Set-up for the Shootout will be a bit of a guess, but we’re not really going for a lap time, it’s just testing.”

Courtney was 0.4s adrift of his fellow native Western Sydneysider this morning, having jumped from the bottom half of the field to first position just after the hour mark,

Coulthard, fastest at last year’s pre-season test, was the only other driver to lap under 90 seconds, being the first man to do so just over twenty minutes into proceedings.

The Brad Jones Racing driver also endured a wild final corner spin late in the piece as he failed to get close to his personal best for the remainder of the session.

Will Davison was fourth and Ash Walsh seventh in an encouraging showing for Erebus Motorsport.

Marcos Ambrose continued to make progress as he re-acclimatises to V8 Supercars, taking the X Box-backed DJR Team Penske Falcon to fifth for the session.

Ambrose was one of only six drivers to record a better lap than they managed during yesterday’s three hit-outs.

Shane van Gisbergen continued to fight his Tekno Autosports Commodore to 17th, Craig Lowndes experienced a spin on his way to 20th, and Jamie Whincup was 23rd.

A full-field Shootout will complete the SuperTest from 1400 AEDT.