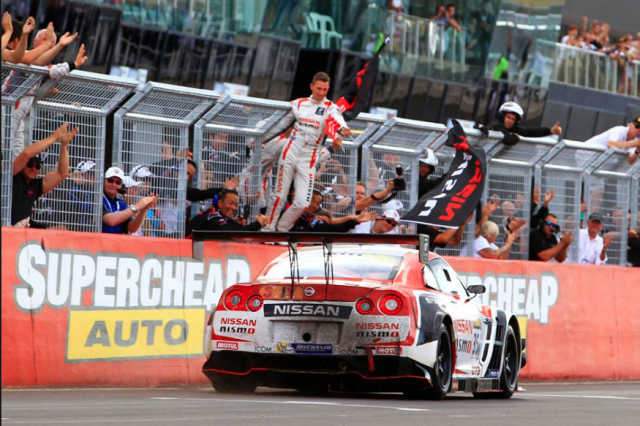 Brought home by diminutive Japanese driver Katsumasa Chiyo, the GT-R sliced its way from third position and into the lead after the restart from a 20th Safety Car period with just over four minutes remaining.

It was the first win by the Japanese manufacturer since Jim Richards and Mark Skaife took a second successive Bathurst 1000 victory in the R32 Skyline GT-R in 1992.

Wolfgang Reip pitted the GT-R from the lead with 1:43min remaining handing it to Florian Strauss who did a quick-fire 40 minute stint before Chiyo completed a tense final hour.

“It was really stressful and our first win. There were a lot of emotions,” Reip said.

The #10 Bentley almost took an against-the-odds win after being hit with two drive through penalties and a dehydrated Matt Bell before claiming fourth.

Bell’s drink bottle malfunctioned in his initial stint causing him to vomit in the car and seek medical treatment before recovering to negotiate the final stint and give team-mates Guy Smith and Steven Kane a sniff of victory.

Andrea Montermini, Benny Simonsen and Renato Lobarto came from the back of the grid in a stirring drive to claim sixth with David Russell, Steve Owen and Roger Lago in the Lago Lamborghini seventh.

The second half of the race continued to be interrupted with Safety Car interventions.

Erebus Motorsport’s two-car attack was dealt a blow when a right rear puncture sent Nathan Morcomb end-on into The Cutting which brought out Safety Car #10.

The #43 Class I Mazda RX-8 went in at the same spot bringing out another caution soon after while the #35 Nissan took the lead from the #97 Craft Bamboo Aston Martin.

Canto was subsequently handed a drive through penalty for the incident.

The #52 compareinsurance.com.au Aston Martin driven by Gordon Shedden brought out Safety Car #13 with just over four hours remaining when it speared into the gravel at Murray’s Corner.

Ash Samadi was sent for a high speed ride at the Chase in the #7 Mercedes SLS after contact from Matt Bell in the #10 Bentley which triggered the 14th caution period.

Bell subsequently dropped a position to fifth after receiving a drive through for the incident.

The Ginetta GT4 had black smoke billowing from its engine before stopping on the circuit and bringing out a record-equalling 15th Safety Car.

After the longest period of green running which stretched to 65 minutes, the #6 Class B Porsche driven by Aaron Zerefos slewed off at Murray’s Corner, beaching the machine in the gravel.

It signalled a record 16th Safety Car before Richard Muscat in the #36 Erebus Mercedes SLS took control for the restart.

Ivo Breukers was pitched into the gravel before slamming into the wall at McPhillamy after being assisted by Felix Baumgartner in the #16 Phoenix Audi.

Breukers escaped the accident unhurt however was subsequently taken to hospital as a precaution after complaining of a headache.

Vanthoor pitted from a 50-plus second lead with just under an hour remaining handing the lead to the #10 Bentley.

Shortly after, the #11 Bentley with Maxi Buhk aboard came to a stop on Mountain Straight bringing out the the 18th Safety Car.

It was recovered and taken back to the pits on a flatbed with the race restarting with 38 minutes remaining.

Then the Flying B Bentley driven by David Brabham found the fence at The Cutting which brought out another Safety Car after an incident with Stefan Mucke’s #97 Aston.

Brabham placed in a neck brace and taken to the medical centre before taken transported to nearby Orange hospital for precautionary x-rays.