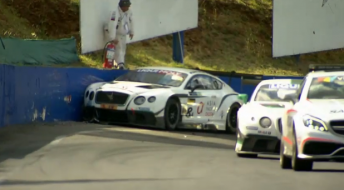 German driver Stefan Mucke says the accident which left David Brabham in hospital late in the Bathurst 12 Hour was a misunderstanding.

Brabham was running just outside the top 10 in the closing stages of the Mount Panorama marathon when he was pushed into the wall by Mucke’s Craft Bamboo Aston Martin.

The Flying B Bentley Brabham was sharing with John Bowe and Peter Edwards slammed into the wall at The Cutting.

Brabham was treated at the circuit before being transferred to Orange hospital for observation where he was reported to be sore but otherwise feeling okay.

The 2009 Le Mans 24 Hour winner had x-rays for possible neck and rib damage but was given the all clear before being released later in the evening.

Mucke, who was hunting for a podium position, described how he thought Brabham was letting him past just after a restart.

“He (Brabham) moved to the side for the Nissan and I was in behind him,” Mucke told Speedcafe.com

“He went very wide into turn four and I thought he was letting me by because he knew we were in the leading group of cars.

“Actually we were side-by-side and he suddenly then turned in and I was surprised because I thought he let me through.

“I’m really sorry for that I hope he is alright.

“I didn’t want to push him into the wall at all.

“He was so wide and was lifting very early so I had an opportunity to go in (to the gap) and I wasn’t charging or anything.

“It was just a misunderstanding because he was on the right side and he couldn’t see me.”

Mucke and team-mates Darryl O’Young and Alex MacDowall proceeded to finish third in a grandstand finish.