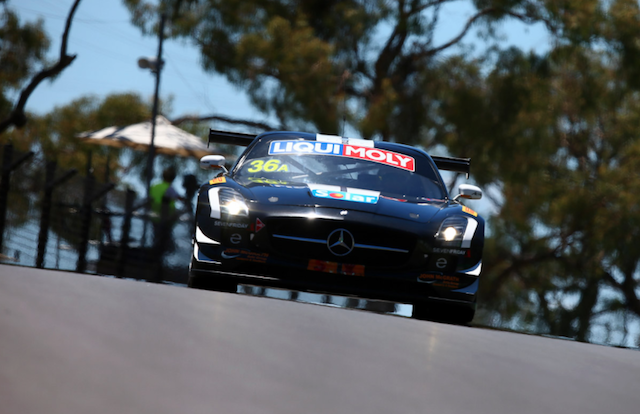 The Erebus Motorsport Mercedes SLS inherited the lead following a chaotic first half of the Liqui Moly Bathurst 12 Hour.

Jack LeBrocq took command of the race in the #36 from Steve Wyatt in the #77 AF Corse Ferrari 458 Italia with Steven Kane in the #10 factory M-Sport Bentley in third.

Katsumasa Chiyo was promoted to fourth in the NISMO #35 GT-R.

However the ninth Safety Car period has put the order out of sequence with the #15 Phoenix Audi of Laurens Vanthoor, fifth after 135 laps, the effective leader after dominating from the outset.

In the first half hour the #2 Class D BMW hit a kangaroo in Conrod Straight bringing out the first caution.

The #48 Lamborghini and the #16 Phoenix Audi driven by Stephane Ortelli were the first of the Class A runners to pit under yellow.

Approaching the two hour mark the #51 Imak Porsche was involved in an incident with the #66 GT3 Endurance/Mobil 1 Porsche at Forest’s Elbow bringing out the third safety car.

At the four hour mark, the Trass Family Ferrari driven by John McIntyre which had been occupying a solid top 10 position, lost ground after being tagged by David Russell’s #32 Lamborghini.

Peter Fitzgerald had a wild ride through the Chase in the #2 Audi R8 LMS catching both gravel traps on either side of the track before bringing out a Safety Car.

Fitzgerald and the #8 Bentley of John Bowe made contact at the kink leading into the Chase which led to the incident.

“I saw one Bentley coming and I eased out going into the Chase and then another one came through on the inside and pushed me out of the way,” Fitzgerald said.

“They are just big bad Bentleys as far as I’m concerned. It’s not something I’d like to repeat on the regular basis.”

On the restart the #10 factory M-Sport Bentley of Matt Bell fired into the pits leaving Dean Canto’s #36 Erebus Mercedes in front, the first time the #15 Audi had not lead the field away after a stoppage.

Bell had to seek help after swapping spots with Steven Kane when he collapsed in the Bentley garage.

The driver was suffering from heat exhaustion but is clear to continue when called for his next stint.

The Bentley operation has been hit with a string of incidents including drive through penalties sparked by restart infringements.

The #35 Nissan GT-R driven by Florian Strauss speared into the lead from Canto’s SLS approaching the five hour point on lap 114.

An accident at The Cutting by the #92 MARC Ford Focus brought out the eighth Safety Car period.

While under caution the #55 Class D TT RS collected the back of the #29 Class A Trofeo Motorsport Ferrari between McPhillamy and Skyline.