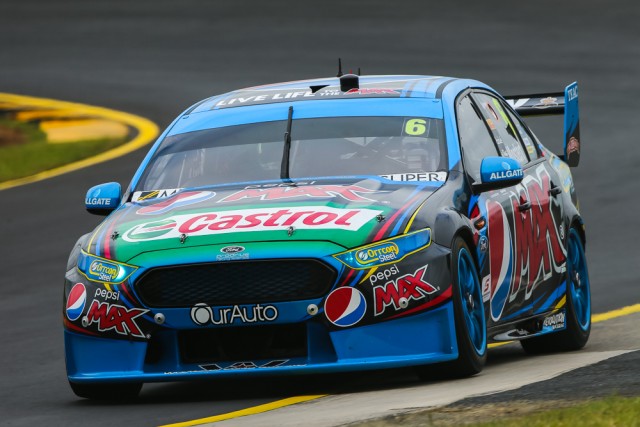 Chaz Mostert has topped the Armor All Shootout at the Sydney.com SuperTest in a promising debut for the Ford Falcon FG X.

The full field Shootout provided the first glimpse of the 2015 field on equal footing, with each car rolling out on a new set of hard tyres.

Mostert laid down a 1:30.66s lap with six cars yet to run and while Shane van Gisbergen, James Courtney, and team-mate Mark Winterbottom all came close, none could unseat the Prodrive Racing Australia driver.

The result gave the new model Falcon a sweep of both sessions of the day after Winterbottom was fastest in the morning session.

The Shootout made its debut at an official test day as the pre-season event was run over two days for the first time.

Each driver took their turn to set a lap in a reverse of last year’s points standings for the respective Racing Entitlements Contracts.

Todd Kelly, fastest yesterday, was fifth out and the first notable to set a time on the Sydney Motorsport Park circuit, comfortably taking the ascendancy with a 1:32.8378 despite missing the apex at Turn 8.

Kelly was immediately bested to the tune of a second by Marcos Ambrose, whose time stood up until James Moffat, eleventh onto the circuit, delivered a committed 1:31.11s lap to put an Altima back on top.

Michael Caruso edged his Nissan Motorsport team-mate another five cars later, but was ultimately excluded from the session due to being late to pit exit.

Mostert was the first to break into the 1:30s and while Courtney at least emulated that feat, he could not quite make up the tenth he gave up in the first sector.

Craig Lowndes, Jamie Whincup, and Shane van Gisbergen had struggled with uncooperative vehicles all weekend and while the Triple Eight pair’s Shootout laps continued the theme, the Kiwi fell less than 0.01s short of Mostert.

Mostert earns $2,500 from pole position sponsor Armor All for the result. A Ford has not won a pole position at a race meeting since the penultimate event of 2013 at Phillip Island.

Mostert and his Blue Oval peers will have a chance to break that duck when the season proper commences with Adelaide’s Clipsal 500 from Thursday 26 February to Sunday 1 March.