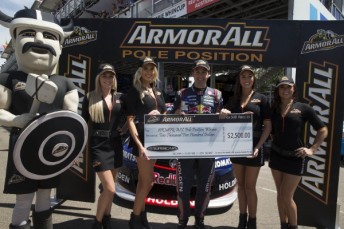 Armor All has renewed its sponsorship with V8 Supercars in 2015

The Armor All Pole Position award will continue to be backed by the car care product company which will signal its 10th year in the category in 2015.

Armor All decided to double its $10,000 prize by virtue of the deadlock for the most poles which added to the purse given to drivers across each race in the Championship Series.

The company will continue to back the pole award, the top 10 shootout format and the Gold Coast 600 event in October as well as being the official car care products partner of the Dunlop Development Series and V8 Utes.

“V8 Supercars is the perfect match for Armor All and we are proud to be closely aligned with Australia’s leading motorsport category.

“Armor All stands for quality and performance, just like V8 Supercars. We love helping V8 Supercars fans keep their cars looking like new and can’t wait to see everyone trackside in 2015.

V8 chief executive James Warburton said Armor All had been a constant in V8s for a decade.

“It is fantastic to be celebrating that milestone in 2015,” V8 Supercars chief executive James Warburton said.

The company will offer its first prize at – Armor All Supershootout – at Sydney Motorsport Park today.