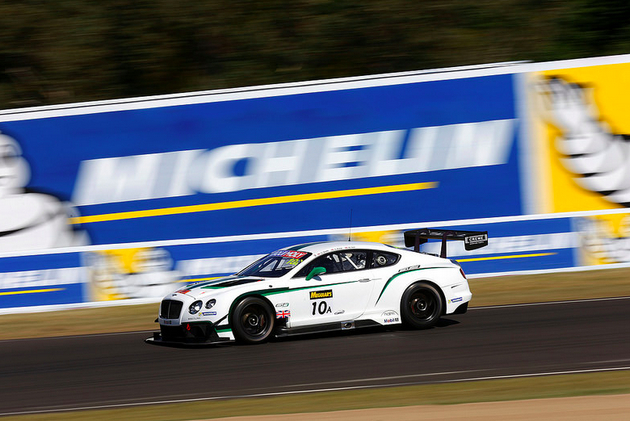 Bentley will continue with a gentle approach in the build-up to the Bathurst 12 Hour with the factory outfit confirming Steven Kane will be handed the qualifying duties.

Northern Ireland driver Kane is aiming for a mid-top 10 berth for the #10 Continental GT3 he is sharing with 2003 Le Mans 24 Hour winner Guy Smith and British GT star Matt Bell.

Smith, who was part of the line-up who conquered Le Mans in the Speed 8, will be given the starting duties for the race which will blast off in the dark at 5.50am tomorrow.

Kane said the Bentley operation, which has seen a huge effort to repair the sister #11 after its Practice 3 shunt, will avoid chasing pole speed.

“We don’t want to take any chances passing people but I think if we will get a clear lap we will be close to the front,” Kane said.

“I think if we are around sixth that would be a good starting point.

“Qualifying is nice and important but it’s not the be all and end all.

“We saw with HTP last year, they qualified 12th and came through to win the race.

“With any endurance racing it’s about having good race pace and staying out of trouble and that’s what our focus is on.”

The #11 M-Sport Bentley will be handled in qualifying by the rapid German Maxi Buhk after it came through final practice without any glitches following its all night repair.