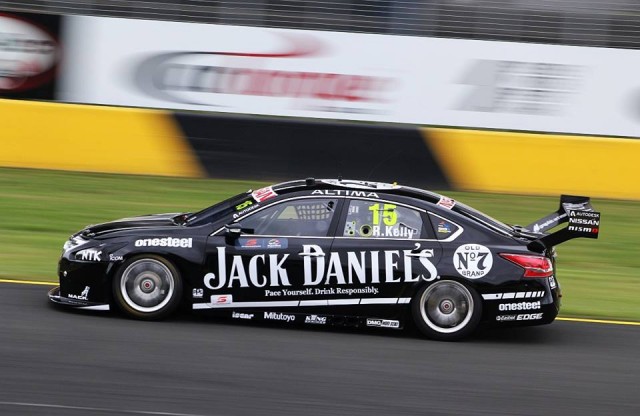 Rick Kelly’s partnership with new engineer George Commins is off to a positive start, with the #15 Nissan Altima proving fastest in the first session at Sydney Motorsport Park.

Today’s test is split into three sessions, with the first taking place over two and a half hours. Track conditions were dry for the most part, despite light sprinkles of rain falling during the morning.

Kelly set his best of 1:30.59s in the final minutes to bump previous fast-man Chaz Mostert from the top of the order by just 0.0065s.

Tim Slade was less than 0.01s further back in third having set his personal best shortly after the first hour had elapsed.

“We’ve obviously come in with a different race engineer and data engineer on my car so we’re a bit out of our comfort zone with that,” Kelly told Speedcafe.com.

“We stepped through two really old sets of tyres and then did a run with a set that was under 100kms old and went really well.

“We’ve still got a bit of work to do on how the car will react on green tyres and we’ll deal with that as the test day goes on.”

Like the Holdens and Fords, the Nissans also have a revised aerodynamic package for this season, which has included moving to an end-plate mounted rear wing.

“We had a couple of things to fine tune (on the car to deal with the different aero) and now it’s really nice and balanced, so we’re pretty happy.” 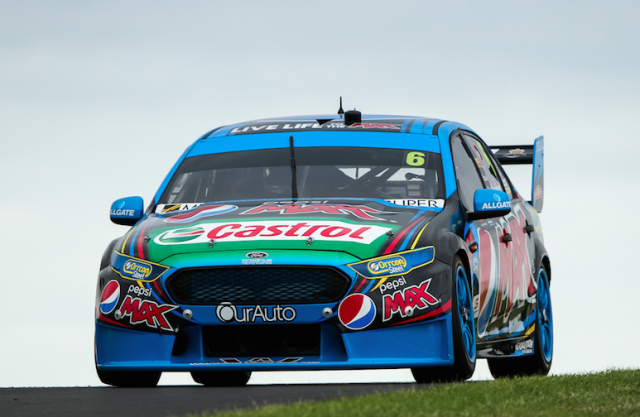 The Ford teams meanwhile had an early challenge with their new aero, as all three FG X drivers reported bonnet flexing early in the going.

The reprofiled bonnet bulge, which now runs all the way to the trailing edge of the bonnet, has required extra bracing in order to stop movement at high-speed.

“We’ve sorted out some temporary bracing for today and will have a more permanent solution sorted for Adelaide,” said Prodrive’s Tim Edwards.

Prodrive also dealt with minor flexing of the bootlid on one of its FG Xs, which have their rear wing further back than on the FG.

All three FG X Falcons, including Mostert’s new chassis that had not turned a wheel until this morning, are running without spare front bars this weekend amid the rush to produce the new bodywork following January’s homologation running.

Clutch problems meanwhile hit DJR Team Penske’s Marcos Ambrose, who had a spin at Turn 2 before spending the last hour of the session pit-bound while the team attended to the issue.

The former NASCAR driver ended the session 23rd, ahead only of the Super Black Racing Falcon FG of Andre Heimgartner.

The session’s only red flag belonged to Nick Percat, who parked his Lucas Dumbrell Motorsport Holden at the final corner after it lost a right-front wheel, which had gradually worked loose during a run.

“I was coming around the back of Corporate Hill and felt it was loose. By the time I got to the last left-handers it came off,” he said.

“It’s a totally different world from where I’ve come from and it’s going to take a bit of time to work it out,” he said.

Team-mate Tim Blanchard meanwhile did not turn a lap in the first session, with the team still completing preparations on the ex-Russell Ingall Commodore.

“It was a lot of work for the guys to build up two cars in a couple of weeks,” said Blanchard.

“We had a few things to finish off on my car to make sure it was right before we send it out.”

The only co-drivers to run in the first session were Dean Fiore, who cut laps in Michael Caruso’s Nissan, and Tekno Autosports team owner Jonathon Webb.

The next session will get underway at 1:00pm local time. 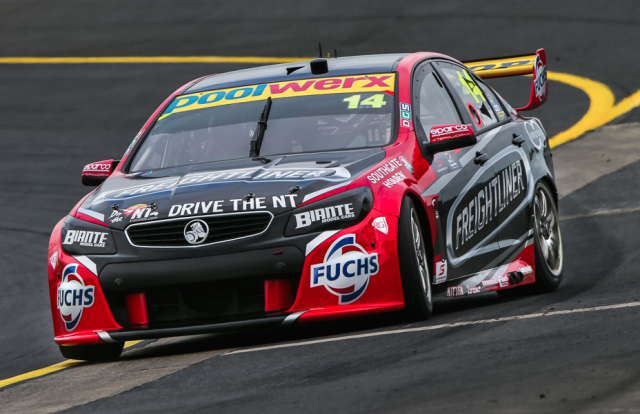 Fabian Coulthard pushed hard on the way to fourth fastest