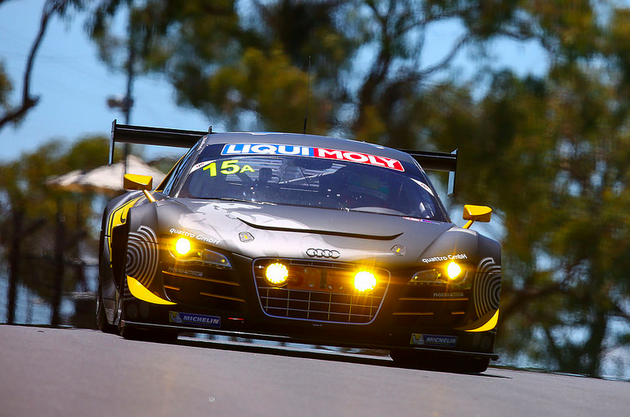 Audi has proved to be quick at Mount Panorama having won the Bathurst 12 Hour in 2011 and 2012 but has struggled in recent years as a result of the Balance of Performance figures designed to achieve parity in GT3 racing.

The issue was widespread throughout last season resulting in the German manufacturer being given a BoP rule break ahead of the Spa 24 Hours GT3 endurance classic.

Having set a new Bathurst 12 Hour qualifying lap record to secure pole position, the Audi in the hands of Phoenix Racing has proved to be much more competitive than last year.

Reigning Blancpain Endurance Series champion Vanthoor says he has noticed a difference in his R8 compared the same model car he drove at the 6.2km circuit last year.

Although straight-line speed is still an issue, the 23-year-old is confident the Phoenix Racing Audi can put up a much stronger fight this year after finishing fifth 12 months ago.

“Last year we were lacking a lot of top speed and we were unable to fight the others,” Vanthoor told Speedcafe.com.

“This year we are in a much better position but I think we will still have a hard time on the straights.

“I think we have a good car especially for the race.

While a more favourable BoP will help Audi and Phoenix Racing, Vanthoor believes keeping to a set rhythm is the key to converting pole position into a Bathurst 12 Hour victory.

“We are at the front so we have to try and control the race,” added Vanthoor, who will partner Markus Winkelhock and Marco Mapelli in the #15 car.

“The race is long and last year there were a lot of safety cars.

“We have just got to do our rhythm, maybe we will go back at the beginning, but we will stay to our rhythm no matter what the others do.

“I think we have the best driver line-up here and the car has been successful here in the past so the package is there.

“We have just got to avoid any mistakes and we will get the result we deserve.”

The Liqui Moly Bathurst 12 Hour is scheduled to start at 5.50am tomorrow local time.

See below for TV schedule for the Bathurst 12 Hour