Rick Kelly has continued to set the pace at the Sydney.com SuperTest, topping the second session of the day by over six tenths of a second.

Kelly jumped to the top of the time sheets three-quarters of the way into the 90 minute session with a lap that was nearly 0.4s faster than his best in the morning session.

The Nissan Motorsport driver and Shane van Gisbergen were the only two men to dip into the 1:30s as the sun came out at Sydney Motorsport Park, reducing grip and preventing most drivers from improving on their earlier times.

Shane van Gisbergen had led for the middle half-hour of the session, despite a ragged run in the Tekno Commodore which saw the Kiwi suffer a spin at Turn 8 and later an off at Turn 2. 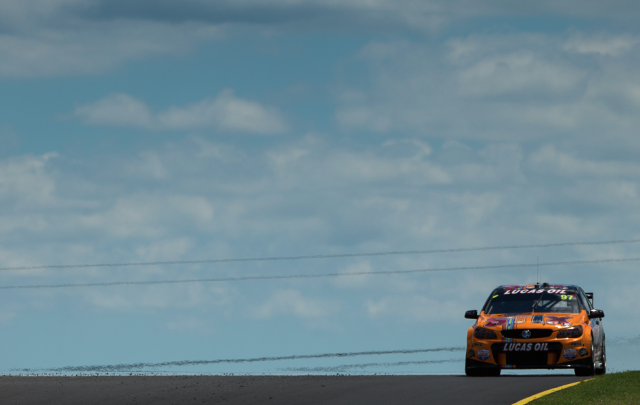 Jamie Whincup wrestled his Red Bull Racing Australia Commodore around the Western Sydney circuit and experienced a high-speed spin at Turn 4 just beyond the hour mark.

The six-time champion moved up to fourth shortly after despite his best lap being nearly 0.5s slower than in session one.

Michael Caruso’s early run stood up for fifth best come the chequered flag, despite a wild ride through the infield after over-correcting a mistake at Turn 5 which saw the Altima collect sponsor signage in the early minutes.

Marcos Ambrose made progress as his DJR Team Penske crew got on top of clutch problems which had hampered the Xbox Falcon earlier in the day, undercutting his session one best by 0.3s despite the slower track.

Ambrose finished just behind Mark Winterbottom in ninth, but ahead of Craig Lowndes in 14th and James Courtney in 17th.

Tim Blanchard turned a handful of laps after sitting out the opening 150min hit-out as Lucas Dumbrell Motorsport completed preparation on the Triple Eight-built Commodore for the new season.