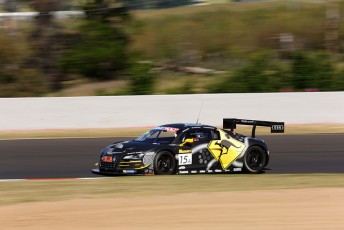 Vanthoor produced a stunning 2:03.53s tour in the latter half of the 60 minute work-out in the R8 LMS.

Phoenix are yet to decide on whether to go with more than one driver for this afternoon’s qualifying session with Vanthoor backed up by the rapid Marco Mapelli and 2012 GT1 world champ Marcus Winkelhock.

“The car seems fast, much better than last year. I feel confident we have a good driver line-up for the race,” Winkelhock said.

“Marco has adapted really quickly and Laurens knows the track from last year.”

Nissan’s #35 GT-R emerged late in the session to challenge Audi with a 2:04.18s lap moving the Japanese factory NISMO entry into second fastest.

The #11 Bentley was 21st while #99 Craft Bamboo Aston was 28th after their respective rebuilds.

A red flag brought the session to an end five minutes early when Chris Pither (#12 Ice Break Porsche) suffered a brake issue and made contact in the run down to The Dipper.