Lexus will showcase three models for its Safety Car program, but only one has been earmarked as a potential race car

Any future V8 Supercars entry from Lexus will come fitted with a 5.0 litre V8, regardless of the category’s move to open its engine rules from 2017.

Lexus Australia boss Sean Hanley stressed the suitability of its RC F V8 to a racing program during an announcement of its V8 Supercars Safety Car deal at Sydney Motorsport Park today.

The Japanese car brand will provide the Safety Car, Course Car and Medical Car to the championship over the next two years, showcasing its RC F, GS 350 F Sport and IS 350 F Sport models. 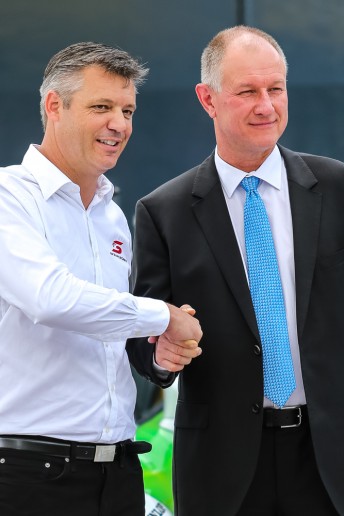 Hanley, who has been vocal about his interest in V8 Supercars racing during recent months, says that the Safety Car marks an ideal platform to assess the category at close quarters.

“It gives us an opportunity to understand motorsport in Australia and how it works,” Hanley told Speedcafe.com.

”We want to understand what opportunities it presents to our brand if we were to place a car in a V8 Supercar race.

“At this point we’re not saying that we will do it or that we won’t. We’re simply evaluating the opportunity.”

While the two-door RC F, which is expected to become eligible under the Gen2 rules, will also be sold with a 3.5 litre V6, Hanley says that the V8 would underpin any racing effort.

In a bid to attract manufacturers, V8 Supercars announced last year that it will open up its regulations to other engine architectures, as well as eventually dropping the V8 prefix from its name.

“I think it’s culturally attractive and from a technology point of view, Lexus can make it work.”

Although making no secret of its evaluation of a V8 Supercars racing program, Hanley shied away from suggestions that the company will be able to make a call on its future by the end of this year.

“We don’t know if 12 months will be long enough to understand the landscape because Lexus is not a company that does things quickly; we do things thoroughly,” he said.

“We’ll get the right people around the car and the right amount of development years required to do the whole lot properly.”

Hanley has promised to “heavily activate” Lexus’ involvement with the V8 Supercars Safety Car this year and will personally attend several events.

“We’ll have potential and existing customers experiencing the RC F and V8 Supercars racing in a safe environment before the main race, as well as hospitality invites throughout the season,” he said.

“Above all we get to showcase our car before and during the races, so we’ll be as much a part of the coverage as anyone else.”

Hanley meanwhile said that he has had no discussions with his international Lexus counterparts about tapping into the company’s global GT3 program.

Lexus has recently declared plans to campaign an RC F GT3 in Europe and North America but, according to Hanley, it will not be seen in a factory capacity here.

“I can be very clear that our current thinking is very much V8 Supercars,” he said.

“I think that V8 Supercars offers the brand the exposure and credibility that we play in right now.”