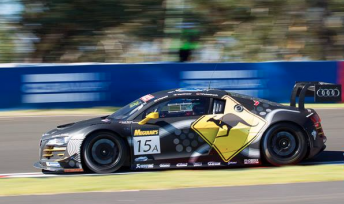 The Phoenix Racing Audi has sliced to the fastest time in Practice 2 for the Liqui Moly Bathurst 12 Hour.

Crewed by the all European line-up of double Italian GT champion Marco Mapelli, Marcus Winkelhock and Laurens Vanthoor, the Audi was the first of the GT3 runners to dip under the 2:05s barrier.

Clearwater Racing were third fastest with the Ferrari 458 Italia ahead of the #10 M-Sport Bentley.

Matt Kingsley was the unwitting victim of an incident early in the session resulting in damage to the #38 Class B Porsche which brought out the red flag.

The third and fourth 60 minute practice sessions continue this afternoon.