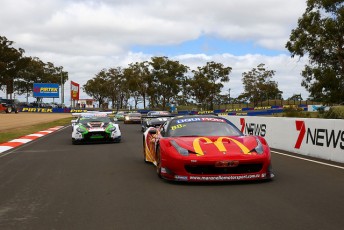 The reigning Bathurst 12 Hour winners are facing an early exit from the event after Tony D’Alberto was involved in a heavy shunt with the #99 Craft Bamboo Aston Martin in the closing stages of the opening practice session at Mount Panorama.

As a result of the crash at Forrest’s Elbow, the team has confirmed the McDonald’s backed entry cannot be repaired at the circuit.

Maranello Motorsport boss Mark Coffey says the outfit is investigating an option to use AF Corse’s #3 Ferrari 458 which withdrew from the event earlier this week.

“It’s not repairable here, it is back at the shop, so we are considering doing something with AF Corse as they have a spare care here. Its a disappointing start.

“If we can strike a deal with the AF Corse car then we can continue.

“I’d like to push the campaign as we have come so far. We have some sponsor commitments so we will see what unfolds in the next couple of hours.”

D’Alberto has been cleared of any serious injury in the crash but is due to undergo an X Ray after complaining of pain in his shoulder.

Craft Bamboo Racing are hopeful the Vantage GT3 #99 car can be repaired in time for the third practice session this afternoon after sustaining heavy frontal damage in the crash.

“It looks like we can repair our car,” said Craft Bamboo driver Frank Yu told Speedcafe.com.

“We hope our weekend can improve from here. I hope we can be out for P3.”