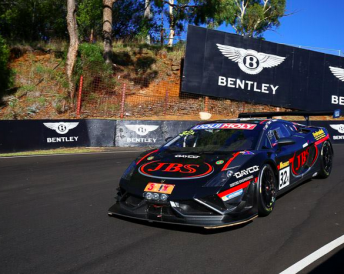 As incidents continued to stymie the flow of sessions, Russell guided the Lago Racing Gallardo LP600 to a 2:04.23s lap.

He was almost 1.5s quicker than Mok Weng Sun who set the best time in the Clearwater Ferrari 458 Italia while the #15 Phoenix Audi of Marcus Winkelhock was third best.

The session followed a familiar trend as the previous two runs by being brought to a halt 15 minutes in when the #11 M-Sport smacked the outside wall on the exit to The Cutting.

“I think I was too positive going into the corner,” Soucek said.

“It was a stupid mistake and clearly my fault.

“I just clipped the wall. It was quite a big shunt and hopefully the team will be able to fix it for tomorrow.”

Soon after going green another red flag was waved for the Sherrin BMW 135i’s massive off track excursion with Ian Sherrin escaping injury.

It was an eventful session for the #64 Porsche which stopped at The Dipper, causing the session to come to a close just under four minutes early.

The Motorsport Services Porsche had earlier lost one of its doors with Devon Modell behind the wheel which had come to rest in the middle of a gravel trap.