The double world champion set the fastest time of the test so far with a 1:59.963s effort aboard a revised Yamaha featuring several new components.

Lorenzo improved by more than second from the time he set on the previous day as the Spaniard edged Ducati’s Andrea Dovizioso by just 0.052s, who continued to impress for the Italian team.

Reigning world champion Marc Marquez was third fastest just over a tenth adrift of Lorenzo’s pace despite suffering a fall in the closing stages.

Marquez continued to utilise two bikes during the second day of running as the team refined the set up on its RC213V machine. 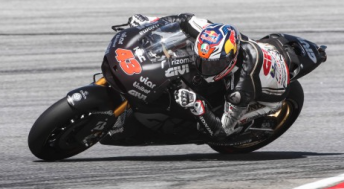 Meanwhile, LCR Honda’s Jack Miller ended the day 23rd on the timesheets after missing most of the morning session following a crash.

The young Australian will focus on outright pace when testing continues later today.

“So, it wasn’t such a bad day for us, we are learning step by step about the MotoGP bike,” said Miller.

“We missed this morning because I had a small crash with the old tyres and after that it shook my confidence a little bit.

“By the end of the day we started to become a bit more comfortable with the bike and we were working on long distance again, working to conserve the tyres.

“Tomorrow will look to push for a good lap time in the early hours before the temperatures rise too much.

“All in all we’re sort of happy today, I’m still not where I want to be but we are improving step by step.”