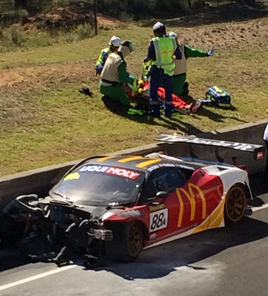 David Russell went quickest in the first practice session for the Liqui Moly Bathurst 12 Hour which was cut short by a heavy shunt involving Tony D’Alberto.

Mika Salo was the next best on a green track in 2:06.41s in the Maranello Motorsport 458 Ferrari Italia before handing it over to D’Alberto.

But D’Alberto’s run ended with a nasty crash at Forest’s Elbow which also included the #99 Craft Bamboo Aston Martin Vantage driven by Jean-Marc Merlin with both cars suffering significant damage.

D’Alberto was treated on the side of the circuit with the session red flagged with just over five minutes remaining before he was transferred to the medical centre for observation.

He was then taken to Orange hospital, just over 50km from Bathurst. 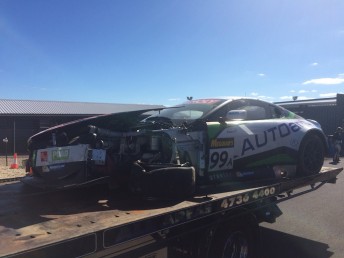 Jean-Marc Merlin was involved in a cash which stopped the opening practice session’Tony is okay and they are just going through the precautionary checks,” Maranello Motorsport team manager Mark Coffey said.”He is in a neck brace and he says he has some pain in his shoulder so he will have an X-Ray but he is in good spirits though.”

The Maranello Motorsport team have already ruled out trying to fix the car.

“At this stage it is almost certain that the car is unrepairable so it looks like we will not be able to defend our Bathurst 12 Hour title,” Coffey said.

Kiwi Jono Lester made a good fist of his first outing on the 6.2km track to claim fourth best in the Trass Family Motorsport Ferrari 458.

Early in session the red flag came out when the IMAK Porsche suffered a crash at The Cutting with the team confident of repairing the damage to the front left ahead of Practice 2.