Jamie Whincup’s V8 Supercars season is off to an ominous start, with the six-time champion bitten by a black-headed python during a promotional photo shoot.

The Red Bull star had been one of a number of drivers at Taronga Zoo for the V8 Supercars media stunt ahead of the weekend’s pre-season test.

Whincup has been left with a swollen right-hand after the non-venomous python latched onto him while being handled for a photo.

“We were setting up a shot with the champion’s trophy with a snake and we were probably taking the piss a little bit,” Whincup told Speedcafe.com.

“We had to move around a couple of times and the snake has just had enough and latched onto my hand.

“It’s not venomous so I wasn’t too concerned but some of its teeth were right in, touching either a vain or a knuckle. 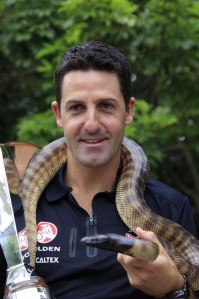 “It was a little bit uncomfortable there for a while but the trainer was right there, trying to get him off.

“The way its teeth were positioned, he had to push it in even harder, which was pretty uncomfortable.

“It was probably three or four minutes before we could get it to unleash.

“I’ve ended up with a bit of swelling and I can’t move that knuckle too much but I’ll live to fight another day.”

Whincup says he will head to hospital for a tetanus shot this afternoon but is not worried about the injury hampering his weekend of testing.

“It should calm down no problems, so I’m not worried about it,” he said.

“I feel more sorry for the zoo because it was just a one-off freak event. They (the snakes) are normally pretty placid.

“I don’t normally like to mess with animals to be honest, they’re not for playing around with,” he added.

“But the photographers and TV crews wanted a certain shot in a certain position.

“I was saying that we were pushing the friendship and I should have stopped it but I didn’t.

“The handler said it was all good but eventually it just had enough.

“If it had arms I reckon it would have taken a swing at me.”

The incident occurred just hours after Whincup confirmed a three-year contract extension to stay at Triple Eight until at least the end of 2018.