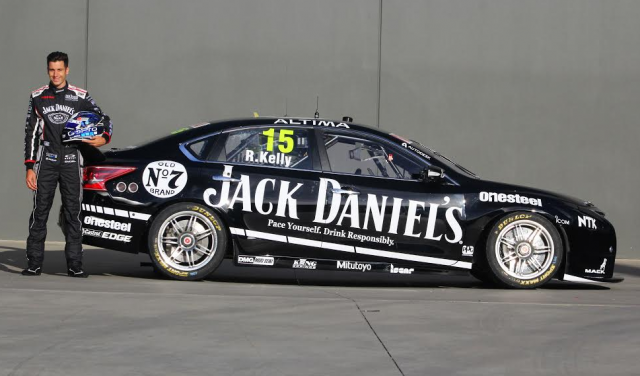 Jack Daniel’s will celebrate the start of its 10th V8 Supercars season by running a throwback livery on Rick Kelly’s Nissan in Sydney.

As confirmed earlier today, the whiskey brand has scaled back to a single-car for this season, with Nissan Motorsport yet to announce a replacement sponsor for Todd Kelly.

As a one-off in Sydney, Kelly will run with the livery design campaigned by the Perkins Engineering Holdens when Jack Daniel’s joined V8 Supercars in 2006.

Jack Daniel’s continued as the primary sponsor of Perkins’ team before the six-time Bathurst winner sold his squad to the Kellys three years later.

While each Jack Daniel’s livery has stuck to the company’s black and white corporate colours, the 2006 scheme remains the cleanest design produced.

“To represent Jack Daniel’s once again in 2015 is a great honour, especially since as a team we are celebrating a decade in the sport, which is a major milestone for any sponsorship anywhere,” said Rick Kelly.

“Jack Daniel’s is one of the strongest brands in the world, and outside of driving the car, working closely with them is the highlight of my job.

“The throwback livery to JD’s first ever V8 Supercars in 2006 is a nice touch for the SuperTest; over the past decade the black and white cars have always been clean and crisp, and really quite distinctive.

“Being the sole Jack Daniel’s car on track this year puts a certain amount of pressure on, but following a quite strong finish to 2014, I’m confident we can continue to build on that momentum into the new season.

“For us this weekend in Sydney is quite exciting, the new extended format will give us plenty of time to try out some new things, while also giving fans great access with Sunday’s track walk.”

Nissan Motorsport will unveil Kelly’s regular season livery in the lead-up to the Clipsal 500 Adelaide.