The Bentley David Brabham will pilot at the Bathurst 12 Hour

David Brabham says he is not prepared to just make up the numbers with the sportscar ace setting his sights on a special Bathurst 12 Hour victory back with Bentley.

The youngest son of three-time Formula 1 world champion Sir Jack Brabham is not only returning to the 6.2km Mount Panorama circuit but is being reunited with the Bentley brand courtesy of Flying B Racing.

Competitive motor racing has taken a back seat for David following the launch of the revolutionary Project Brabham initiative, which aims to resurrect the Brabham team name in top level motorsport.

However, an opportunity to compete at the Bathurst 12 Hour in a customer Continental GT3 alongside double Australian touring car champion John Bowe proved too good to turn down. 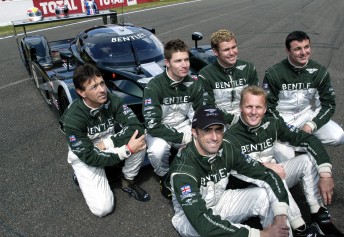 Brabham’s relationship with Bentley stretches back to 2003 when he joined the British manufacturer for Sportscar racing’s jewel in the crown the Le Mans 24 Hours.

Despite being behind the wheel of the quicker of the two Speed 8’s, Brabham finished the French classic in second behind team-mates Guy Smith, Tom Kristensen and Rinaldo Capello.

Although his Bathurst return is his only scheduled race of the season, the 49-year-old Le Mans 24 Hour winner is treating the event just like any other with his eyes fixed on another accolade to add to his illustrious list of career achievements.

After coming so close to victory with Bentley at Le Mans, Brabham admits it would be a special feeling to win at Bathurst for the manufacturer.

“We are going there to win it is a simple as that,” Brabham told Speedcafe.com.

“I think its more of a case of going to Australia and winning at Bathurst whether it is in a Bentley or not, but the fact it is with a Bentley and the history I have does make it a little bit more special.

“I was very fortunate to be chosen back in 2003 to race with Bentley at Le Mans and finish second with them. The other car won we had a great result with a 1-2.

“I’ve always maintained a good relationship with them since then and in particular with Brian Gush the head of motorsport.

“To get to race for them again this time in Australia at Bathurst in a GT3 car I’ve not driven in anger is great.”

While this is Brabham’s first Bathurst 12 Hour start, he is no stranger to endurance racing at the mountain having contested the 2003 Bathurst 24 Hour in a BE Racing Ferrari 360, alongside several appearances in the Bathurst 1000.

The Flying B Racing Bentley

However, this year’s race will see Brabham race a Continental GT3 for the first time with his only experience of the car coming at the Goodwood Festival of Speed last year.

In fact Friday’s opening practice session will be his first laps in the Flying B Bentley, but the former F1 driver is not concerned.

“This is not the first time this has happened in my career,” he said.

“Its a good team with good people John Bowe knows the place a lot better than I do so I will learn off him. I’m really looking forward to it.

“I remember driving the car for Bentley up the hill at Goodwood last year and thinking it would be nice to give this a go on the track.

“What it looks like and what it feels like are quite different. It looks quite big but it doesn’t feel big when you sit in the car.”

The Flying B team has endured a troubled build-up to Bathurst, with a steering vibration plaguing the Edwards-owned car since it was imported new into Australia.

A Bentley engineer was subsequently dispatched to Melbourne, installing a new front-end in the car before a final test at Winton last week, where the team says the issue was finally cured.