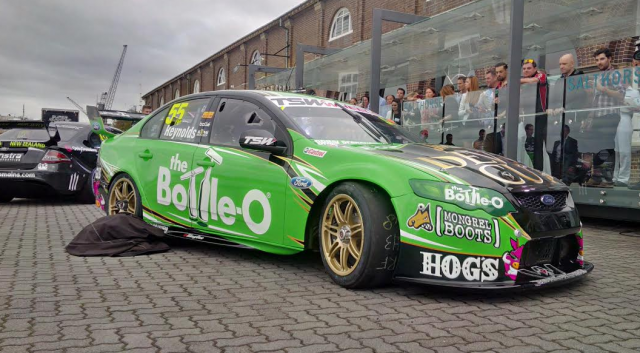 The Bottle-O Ford in its 2015 colours

Prodrive Racing Australia has completed its 2015 launch by unveiling the liveries for its The Bottle-O and Super Black Racing Ford Falcon FGs.

Both entries will start the season sporting the older model bodywork before upgrading to FG X specification.

The Tony Lentino-owned Super Black Ford will be driven by young Kiwi Andre Heimgartner, who graduates from the Dunlop Series.

Lentino’s car remains largely devoid of external sponsorship, promoting the computer mogul’s own Instra and Only Domains businesses, as it did at Bathurst last year. “The last few events last year were really positive and while it sometimes didn’t look that way in the results, the way we had the car handling and performing has put us in good stead for this season,” Reynolds said.

“The podium at Homebush was our best result for the year and while it was a while in the making it was good to get that momentum leading into this season.

Reynolds will be working with ex-Erebus engineer Brad Wischusen this season following Nathaniel Osborne’s elevation to the new position of chief engineer across Prodrive’s four cars.

“He has a lot of experience working in the V8 Supercar industry so it will be good to see what new ideas he brings to the table.

“I’m really excited for the season and for the opportunity to get in an FG X and am ready to attack it head on to get the results I know we can get.”