Formula 1 rookie Felipe Nasr topped the times for Sauber on the third day of the pre-season testing at Jerez.

The Brazilian made the most of a short soft tyre run to pip the Ferrari of Kimi Raikkonen to the top spot.

Nasr clocked up a valuable 109 laps of running for the Swiss team with his best effort of 1:21.545s arriving late in the day in fully dry conditions.

Ferrari continued to impress with Raikkonen just two tenths of a second adrift of Nasr on slower rubber.

The Finn, who completed 94 laps, had held the top spot briefly before the Sauber’s run on soft compound tyres.

Mercedes continued to focus on mileage with Nico Rosberg racking up 151 while setting the third fastest time. However, an engine glitch forced the German to come to a halt on circuit early in the afternoon.

Rosberg ended the day under half a second shy of Nasr’s pace just ahead of Williams’ Felipe Massa in fourth. 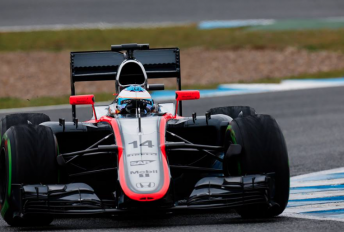 McLaren completed 32 laps on its most productive day yet

Although way adrift of the ultimate pace, McLaren-Honda enjoyed their most productive day of pre-season testing yet.

Fernando Alonso managed to log 32 laps behind the wheel of the MP4-30 in damp conditions before an engine issue ended his day prematurely.

Red Bull was also hit by engine problems which prompted the team to change the Renault power unit in Daniel Ricciardo’s car.

As a result, the Australian was restricted largely to short runs which saw him complete 49 laps before the end of the session.

“I was happy to do some 10-15 lap runs as that’s always where you get a better understanding of the car,” said Ricciardo.

“Every lap we do we understand something more about the car or the driveablility of the Renault power unit. So it was a decent afternoon.

“In terms of where we’re at, it’s impossible to know about the pace because we don’t know what people are running, but I think the consistency today was good, we put a few laps together in the end, so a few positives to take away.”