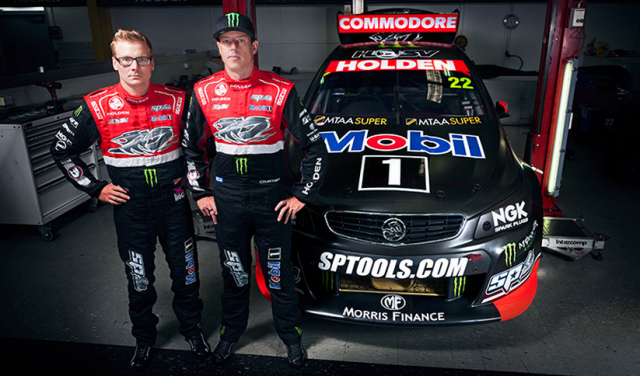 Perkins and Courtney with the car in its SMP test livery

Jack Perkins will return to the wheel of a Commodore this season, joining James Courtney at the Holden Racing Team for the Pirtek Enduro Cup.

The 28-year-old replaces Greg Murphy in the seat after the Kiwi opted out of the team in favour of a role with V8TV.

The move marks a return of the Perkins name to HRT after Jack’s father Larry ran the team during its initial outings in 1989.

Ironically, the team’s 25th anniversary celebrations this season ignore Perkins’ tenure, starting instead when Tom Walkinshaw took over preparation of the cars in 1990.

The younger Perkins will have his first taste of the latest iteration HRT VF at this weekend’s Sydney Motorsport Park pre-season test.

“Like so many Australian kids, I grew up dreaming of racing for Holden’s official factory racing team, so it’s a fantastic feeling to join HRT,” Perkins said.

“It’s also great to be back with Holden. It’s home for my family and I, so I cannot wait to get started and help the lion to roar throughout 2015.

“I couldn’t be happier to pair with James Courtney, who is the only driver to have won a championship during Jamie Whincup’s period of supremacy.

“I’m going to put my best foot forward for James and HRT’s ambitions, and we’ll also do our best to reclaim Bathurst’s Peter Brock trophy as well.”

“It’s great to bring Jack Perkins into the HRT family. He’s fresh from a full-time drive, and comes with solid Bathurst experience – two key ingredients in being able to jump in and be competitive straight away,” Burgess said.

“We’re looking forward to putting him together with James, and know that they will make a formidable pairing for Sandown, Bathurst and the Gold Coast.”