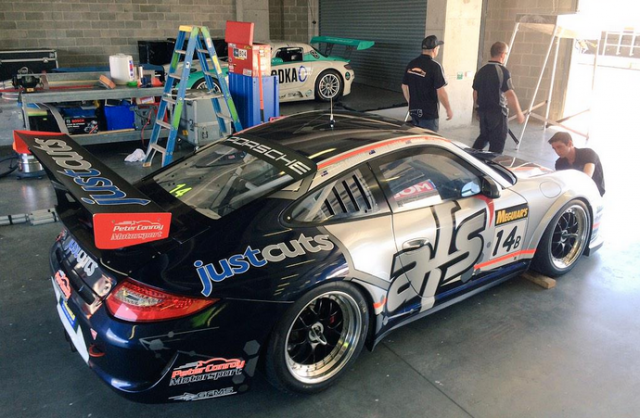 The Porsche that Denyer will race at Bathurst

Grant Denyer will use the Bathurst 12 Hour as a warm-up for a planned full-time Australian GT campaign this season.

The television presenter is set to tackle the 12 Hour in a Class B Porsche alongside Tony Bates and Peter Conroy.

Focussing on his TV career for much of the last decade, the now 37-year-old has not contested a full season of racing since finishing fourth in the 2009 V8 Supercars Development Series.

Last year’s Bathurst 12 Hour ended a complete three-year sabbatical from competition, while he also appeared in the Aussie Racing Car Series round at the same venue in October.

Armed with sponsorship from long-time backer Just Cuts, Denyer says he’s talking to several teams about joining the booming AGTC, which will kick-off in Adelaide at the end of the month.

“I’m working quite hard on it at the moment,” Denyer told Speedcafe.com.

“A couple of opportunities have opened up for me to have a serious attack on the championship.

“My preferred option is an outright entry, but we’re still a couple of weeks away from locking anything down.

“My speed, experience and the fact that I have an amateur rating has put me in a good position.

“The whole category is in a good place at the moment and I’m really keen to be a part of it.”

The Bathurst-based Denyer confirmed that he is available for the full championship, with filming for his only current commitment, Family Feud, taking up just two days a fortnight.

Ten’s rejuvenated push towards motorsport, which has included its acquisition of the free-to-air V8 Supercars rights and the rebirth of RPM, corresponds well with Denyer’s own ambitions.

“They are proudly the home of motorsport and are going to a massive effort to do it well,” he said.

“They’re really quite excited about supporting my return into championship racing.

“With the GT championship on Network 10 it’s all looking really good.”

Denyer tested his Bathurst entry at Sydney Motorsport Park last week and says he’ll be aiming for the Class B win in the 12 Hour.

The former V8 Ute Series winner draws confidence from his two Bathurst performances last year and expects that his relaxed lifestyle will improve his fortunes behind the wheel.

“When I drove in the Aussie Racing Car, I never expected to jump back in at the top of the field, but it felt really natural and comfortable,” he said.

“I think the biggest thing I realise now is how tired I was when I was trying to race in the DVS.

“Between Monday and Friday I was working in a different part of the country, every day, from 3am.

“Trying to put a helmet on at the weekends on top of that was a huge ask.

“If I could win races and score podiums in the DVS back then when I was knackered, I’m really wondering what I can do now that I’m healthy.

“I have a feeling that I’ll be in the best driving form of my life.”