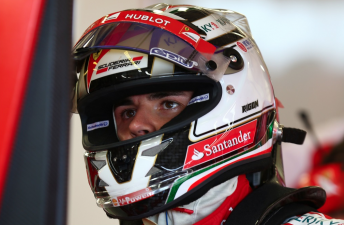 Italian Ferrari squad AF Corse will run a single 458 GT3 in this weekend’s Bathurst 12 Hour after withdrawing its second entry.

Race organisers have confirmed to Speedcafe.com that the #3 Ferrari, which was set to be driven by Peirguiseppe Perazzini, Aaron Scott and Marco Cioci, will not take part.

Perazzini is understood to have pulled the pin on his place in the squad for medical reasons, with the team subsequently unable to find a replacement for the funded driver.

The change leaves the Bathurst 12 Hour field at 53 cars, 28 of which are GT3 specification machines.

AF Corse’s hopes of a strong result with its second car have meanwhile been boosted by the addition of Davide Rigon to its previously confirmed line-up of Steven Wyatt and Michele Rugolo.

The 28-year-old Italian is also part of Scuderia Ferrari’s stable of test drivers, making occasional outings with the Formula 1 team in recent years.

Rigon has largely focussed on GT racing since 2012 after a broken leg early in the previous year’s GP2 season halted his open-wheel progression.