The four-time world champion enjoyed his first day behind the wheel of the Maranello squad’s SF15-T, completing 60 laps including a session best time of 1:22.620s.

Vettel’s day started slowly before a short run in the afternoon yielded the fastest lap.

Sauber surprised many with its new C34 driven by Marcus Ericsson emerging as Vettel’s nearest rival just 0.157s adrift of the Ferrari, while Nico Rosberg’s Mercedes was third fastest.

Despite causing a red flag early in the session, Ericsson clocked 73 laps under his belt in a largely encouraging day for the Swiss team. Mercedes had dominated the morning running with Rosberg 1.5s quicker than anyone else as the session entered the afternoon.

The world champion squad completed the most mileage with last season’s championship runner-up racking up 157 laps.

In the end, the German was just under half a second slower than Vettel’s Ferrari.

Although admitting Mercedes pose an ominous threat, Vettel was relatively pleased with his new Ferrari.

“Today was a good start. I can’t say more than that, because this is only the beginning,” said Vettel.

“Everything is different, even the philosophy behind the car, when compared to what I was used to. But I immediately felt at ease within the team and the guys gave me a very warm welcome.

“For now, lap times aren’t important. I did mine on the medium compound, but the comparison has to be made yet again with the Mercedes. They are very quick, let’s just hope they are not quite as fast as last year.” 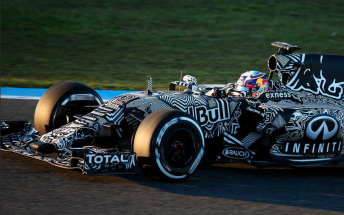 Daniel Ricciardo at the wheel of the Red Bull RB11

Red Bull ended the day with Daniel Ricciardo posting the fourth quickest time behind the wheel of the striking black and white test liveried RB11.

Ricciardo had been Mercedes’ nearest rival in the morning session but a battery issue and overheating rear brakes curtailed his running to just 35 laps.

Despite the issues, the Australian is confident the team has made a number of improvements with its new RB11.

“We got going pretty well and I got a few laps under my belt,” said Ricciardo,

“So the first impressions are good. We’ll get a few more laps over the next few days, but so far everything seems pretty encouraging.

“I can feel a step forward. I won’t go into too much detail but it’s there.

“We didn’t do a whole lot of laps but definitely more than at this test last year.

“In general everything is behaving as it should.

“Obviously we had a couple of issues, but once the car is running it’s all going pretty normally. A good first day, there are some positive signs there.” 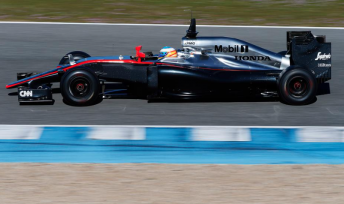 The team admitted the electrical issues were different to those experienced in the Abu Dhabi test late last year.

Honda boss Yasuhisa Arai says the problems have been rectified ahead of the second day of running.

Lotus is expected to debut its new E23 on Tuesday having only arrived at the circuit during the afternoon session.

Force India was the only other team absent from the test after declaring the squad would miss the four day hit out at Jerez.