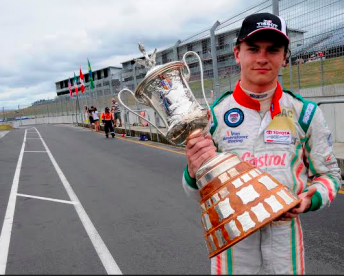 Sam MacLeod has claimed his maiden victory in the Toyota Racing Series with a slashing win in the feature New Zealand Motor Cup at Hampton Downs.

MacLeod, a member of the BRDC Rising Stars program, became the third different feature race winner at the halfway point of the highly competitive wings and slicks series.

MacLeod took an early lead on the wet track eventually winning the 20-lap encounter from Lance Stroll and Brandon Maisano.

Arjun Maini, the Saturday race winner, was fourth, ahead of the consistent Santino Ferrucci, Artem Markelov with Thomas Randle classified in seventh.

Randle was forced to recover his weekend after being eliminated early in the Saturday race with the Australian classified eighth in the middle heat.

Maisano proved too strong in the middle heat from Ferdinand Habsburg with Ferrucci claiming third to mirror his effort in the opening heat.

Canadian Stroll has now moved to 515 points to head the TRS table with Maini on 460 while Maisano is third on 429.